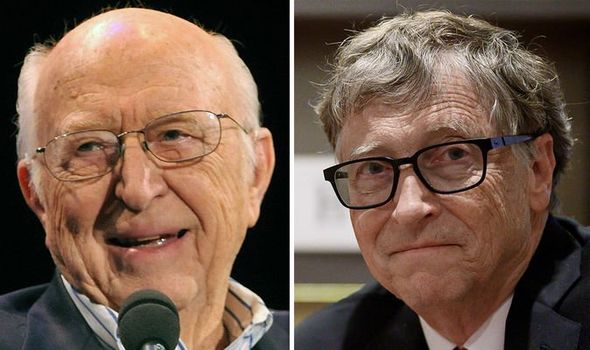 William Gate, the Father to Microsoft  Co-founder, Bill Gates has  Died at the prime Age of 94.

My dad was the “real” Bill Gates. He was everything I try to be and I will miss him every day.https://t.co/OnAEsmosNb

, “My dad passed away peacefully at home yesterday, surrounded by his family.”

“We will miss him more than we can express right now We are feeling grief but also gratitude,” he continued. “My dad’s passing was not unexpected—he was 94 years old and his health had been declining—so we have all had a long time to reflect on just how lucky we are to have had this amazing man in our lives for so many years. And we are not alone in these feelings. My dad’s wisdom, generosity, empathy, and humility had a huge influence on people around the world.”

In the tribute, Gates reflected on his father’s influence on his life, sharing that he and his sisters were “very lucky” to have parents who “gave us constant encouragement and were always patient with us.”

“I knew their love and support were unconditional, even when we clashed in my teenage years. I am sure that’s one of the reasons why I felt comfortable taking some big risks when I was young, like leaving college to start Microsoft with Paul Allen,” he wrote. “I knew they would be in my corner even if I failed.”

“As I got older, I came to appreciate my dad’s quiet influence on almost everything I have done in life. In Microsoft’s early years, I turned to him at key moments to seek his legal counsel,” Gates said.

“My dad also had a profound influence on wy drive. When I was a kid, he wasn’t prescriptive or domineering, and yet he never let me coast along at things I was good at, and he always pushed me to try things I hated or didn’t think I could do (swimming and soccer, for example). And he modeled an amazing work ethic. He was one of the hardest-working and most respected lawyers in Seattle, as well as a major civic leader in our region.” 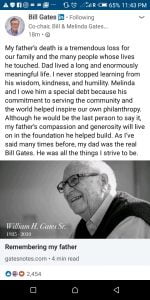 Gates also honored his father’s philanthropic side, writing that the Bill and Melinda Gates Foundation — which Gates Sr. co-chaired — “would not be what it is today without my dad.”