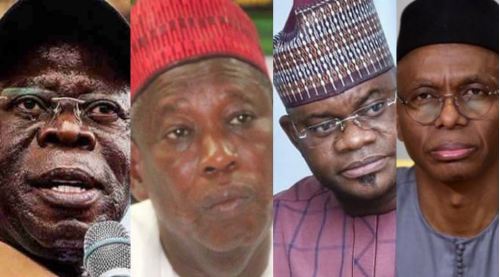 A storm of reactions by Nigerians has greeted the lastest US visa ban list released by the United States government led by President Donald Trump.

This online news platform understands that apart from Oshiomhole, Kano State governor, Abdullahi Ganduje, and Kogi governor, Yahaya Bello, are also among those affected by the latest US sanction, a statement issued on Monday by the spokesperson for the Department of State, Morgan Ortagus, said.

On the other hand, Governor Nasir el-Rufai of Kaduna state, northern Nigeria, had his own visa ban extended. El-rufai has been banned from entering the US since 2010 over a graft case.

According to US officials, more Nigerian politicians may be included on the US Visa Ban List after the Edo governorship election slated for September 19 if they are involved in electoral malpractice. It was gathered that those affected by the latest visa ban have received notification by email and or text messages.

The statement by the spokesperson for the Department of State said those issued visa bans received the sanction for undermining democracy in Nigeria.

It reads, “In July 2019, we announced the imposition of visa restrictions on Nigerians who undermined the February and March 2019 elections. Today, the Secretary of State is imposing additional visa restrictions on individuals for their actions surrounding the November 2019 Kogi and Bayelsa states elections and in the run-up to the September and October 2020, Edo and Ondo states elections.

“These individuals have so far operated with impunity at the expense of the Nigerian people and have undermined democratic principles.

“The Department of State emphasises that the actions announced today are specific to certain individuals and not directed at the Nigerian people. This decision reflects the Department of State’s commitment to working with the Nigerian Government to realise its expressed commitment to end corruption and strengthen democracy, accountability, and respect for human rights,” the statement added.

Moments after the news broke, Nigerians took to the micro-blogging site, Twitter,  to react to the matter.

Ganduje the APC campaign DG for Edo elections is on the US Visa ban list for election rigging.

Ize Iyamu the APC candidate presently has a case of 700 million corruption case preferred on him by the EFCC..

This is the democracy we deceive ourselves with.

Thank you for the good progress Dear @mikepompeo
Truly this is the only way to genuinely help Nigeria and Nigerians.
We need more US Visa Ban for these men. We can help you with list to investigate and ban more. If there is need for it.

UK, EU, Dubai, & Saudi should emulate the US.

The visa ban list should also include the families of election fraudsters,