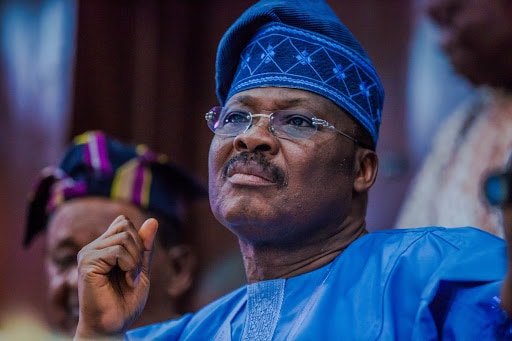 An inside graveyard video of late Senator Isiaka Abiola Adeyemi Ajimobi has caused a barrage of reactions among Nigerians on the microblogging site, Twitter, over the kind of interior design and money spent to construct the graveyard.

Ajimobi had slipped into a coma on June 19 and was admitted at First Cardiologist and Cardiovascular Consultants Hospital in Lagos where he was receiving treatment before he finally gave up the ghost, Naija News recalls.

Barely three months after Ajimobi’s death, a video showing the interior design of his graveyard was released on social media and has since caused a barrage of reactions among netizens.

Reacting to the video which was shared on the bird app by a Nigerian identified as [@ayemojubar], some Nigerians lamented over the huge sum of money spent on the graveyard from its inside to the outside. According to an argument by some of the social media users, they see no reason why money should be lavished on building and beautifying a graveyard where a lifeless body is laid.

Many are of the opinion that the money could have been diverted into something else and not glorying a ‘dust’ that we humans are.

However, some decided to create sarcasm from the video as they make mockery cushions and air condition seen inside the graveyard.

Reacting to the video, a netizen jokingly said that the cushions are for visiting angels the likes of late Abba Kyari, former Chief of Staff to President Muhammadu Buhari that would possibly come around to hold a meeting with the deceased.

Room and pallour with airconditioning for the dead? God, in my next life I want to be a grave robber. What stupidity…na Pharaoh?

The chairs though, like he holds meetings with Abba kyari and other patriots in his chamber?

Not even a kitchen where he can be cooking or TV to be watching BBN. Nawaoo. No wardrobe for cloths too abina only one cloth him go dey wear. Such disrespectful pple