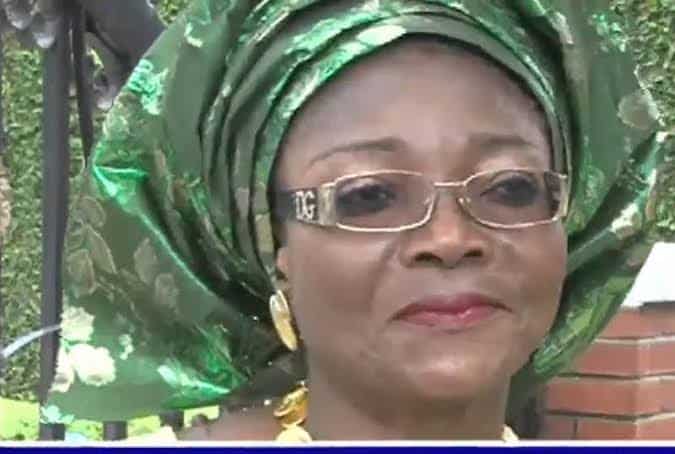 Adebisi Abiola, one of the widows of the late M.K.O. Abiola, has finally spoken on the arrest of her stepsons.

Kassim and Aliu, sons of Abiola, were arrested after they suspected to be connected to the robbery at the late politician’s residence in Opebi, Ikeja, Lagos.

Recall NaijaNews had reported that some gunmen invaded the residence of the late businessman in Ikeja, Lagos, on September 2.

However, on Friday, Abiola’s sons filed a N100 million suit against the police, and blamed their stepmother for their ordeal.

In a statement she released through the family lawyer Debo Adeleke, Abiola’s widow said her stepsons were arrested due to their unruly conduct.

According to her, after the robbery incident, the police started to investigate but instead of cooperating with the police, Kassim and Aliu threatened to deal with them.

The statement reads: “On the 2nd September 2020, at about 6:00 am, some hoodlums suspected to be armed robbers broke into the residence of Late Chief MKO Abiola. The criminals broke into the bedroom of Late MKO Abiola’s wife, in person of Chief Mrs. Adebisi Abiola and carted away valuables running into millions of naira,”

“The victim, Chief Mrs. Adebisi Abiola and her daughter were subsequently locked up in her room with a threat by the armed robbers that they would be eliminated if they raised an alarm. As expected, Chief Mrs. Adebisi Abiola was so petrified, bemused and stupefied by the unfortunate armed robbery incident that she could not raise an alarm even after the robbers had escaped with their loots running into millions of naira.

“It is on record that while the policemen were interviewing the family members, Mr. Kassim Abiola conducted himself in a very rude, ungentlemanly, provocative, embarrassing and suspicious manner and all efforts by other members of the family to make him act in a responsible manner failed.

“It is further on record that Mr. Kassim Abiola did not only throw tantrums at the police but equally threatened to deal ruthlessly with one of the senior police officers whom he (Kassim) claimed to know personally to the extent of describing the said senior police officer’s car and the location where he will deal with him.

“These unguarded vituperation and violent conducts by Kassim infuriated the police and he was subsequently invited for further interrogation for demanding the reason for the presence of the police men in his father’s house.

“It is equally noteworthy to mention here that his junior brother, Aliu Abiola joined him in his tirade of abuse against the policemen who were only trying to interview them and all other persons at the residence with a view to investigating the crime.

“The police subsequently arrested Mr. Kassim Abiola, Mr. Aliu Abiola and seven others for further questioning regarding the investigation of the robbery incident which the police suspected to have been carried out through the active connivance of a member of the family or staff considering the ease with which such an ugly armed robbery incident was carried out.”

According to the statement, efforts were being made to secure the release of those detained in connection with the incident when they learnt that a suit had been filed against the police.

She also described the fundamental rights enforcement suit as wrong and ill advised but said efforts would still be made to secure their release.

“Barrister Debo Adeleke discussed with the Lagos State Commissioner of Police who understandably consented to release them and efforts to release and admit the three men into an administrative bail were concluded on Friday 11th September,2020,” the statement read.

“However, to the family’s chagrin and consternation, while one of the lawyers in Barr. Debo Adeleke’s chambers in company of Engr. Rahmon Abiola, a younger brother to late Chief MKO Abiola who is also the secretary of the Abiola family were making final efforts to perfect the bail of the trio i.e. Kassim and Aliu Abiola and Mr. Popoola, a lawyer from the law firm of Chief Mike Ozekhome, SAN, in company of a woman stormed the Lagos state Police Command and informed the police of the Suit filed in court for the enforcement of the fundamental rights of Messrs. Kassim and Aliu Abiola.

“Consequent upon the above, the police could not go ahead with the planned release of the three men as scheduled for Friday, 11th September, 2024.”