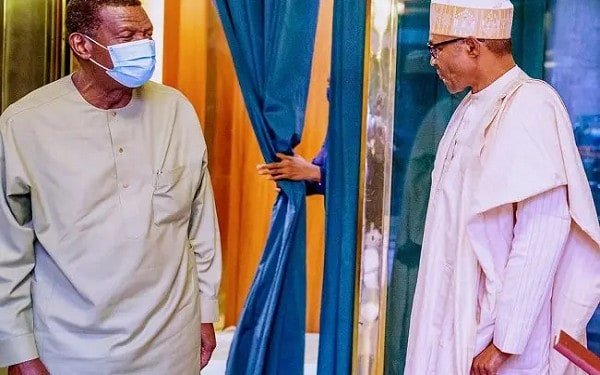 It was gathered that Vice-President, Prof. Yemi Osinbajo, who is also a pastor at the RCCG, was ta the meeting.

The Chief of Staff to the President, Prof. Ibrahim Gambari, also attended the meeting that started around 3 pm and ended a few minutes after.

Pastor Adeboye did not speak with State House correspondents after the meeting.

Also, the Presidency had yet to issue a statement on the meeting as of the time of filing this report.

Section 839 of CAMA gives a provision for religious bodies, non-governmental organisations and charity organisations to be regulated by the registrar of the Corporate Affairs Commission (CAC) and a supervising minister.

Following the signing, the Christian Association of Nigeria (CAN) asked Buhari to withdraw the law and expunge that section.

The Christian body also stated that signing of the law is a declaration of war against Christians.

Reacting through the Head of Media and Public Relations RCCG, Pastor Olaitan Olubiyi, Pastor Adeboye said he backs the stand of CAN.

He stated that his position is not diametrically different from the stands of the CAN and the Pentecostal Fellowship of Nigeria (PFN).

“The stand of the General Overseer of the Redeemed Christian Church of God and the leadership of the church on issues like this is not always different from whatever the Christian Association of Nigeria, CAN, and the Pentecostal Fellowship of Nigeria, PFN.

“We always align ourselves with whatever the stand of the leadership of CAN and PFN on issues like this. The Redeemed Christian Church of God does not take any decision that is at variance with the stand of CAN and PFN and the same thing applies concerning this very issue.

“Daddy will not take a stand different from the ones of the two organisations, CAN and PFN. CAN and PFN have spoken on the issue of CAMA and as far as the Redeemed Christian Church of God is concerned that is our position too. We are in alignment with that stand,” the RCCG spokesman said.