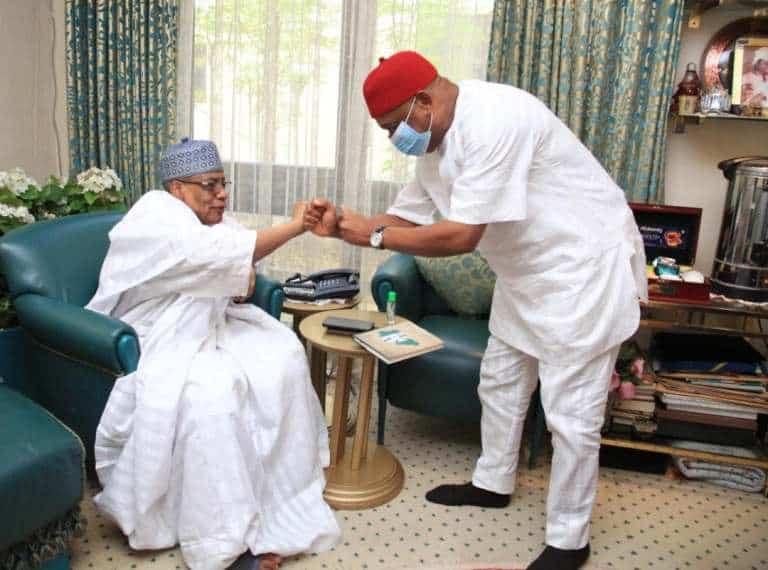 The details of the meeting between the former Abia State, Orji Uzor Kalu with former Heads of State, Gen. Ibrahim Babaginda and Gen. Abdulsalami Abubakar, has been released.

The Senate Chief Whip on Monday paid a courtesy visit to the former Heads of State, Governor of Niger State, Sani Bello and Emir of Minna, Dr Umar Faruq on Monday in Minna, Niger State.

The lawmaker while speaking with newsmen at the residence of General Abubakar, noted he was in the state on a private visit and not as the Senate Chief Whip.

The former Governor added that he was in the state to congratulate Babangida on his health and also to welcome former President Abdulsalami on the success of the minor health operation he had recently.

He said: “Well I am just in Minna to see my two bosses. To first congratulate President Babangida on his health and also to welcome former President Abdulsalami on the success of the minor health operation he had recently.”

“As regards the change of service chiefs, the issue will be addressed through a collective decision of all members of the Senate, I am not here today as the Chief Whip of the Senate.”

“I am in Minna on a private visit as a private citizen but once I am informed about the decision taken by the Senate I would make it known to the public if necessary. The Senators are 109 in number, and we have democracy deeply entrenched in the Senate where we all discuss and agree on issues collectively. The Senate has not taken a position so if I comment on it, I may be wrong.”

He denied the claim that he visited the heads of state over his presidential ambition.

‘I Run My Government For Profitability’ – Governor Yahaya Bello