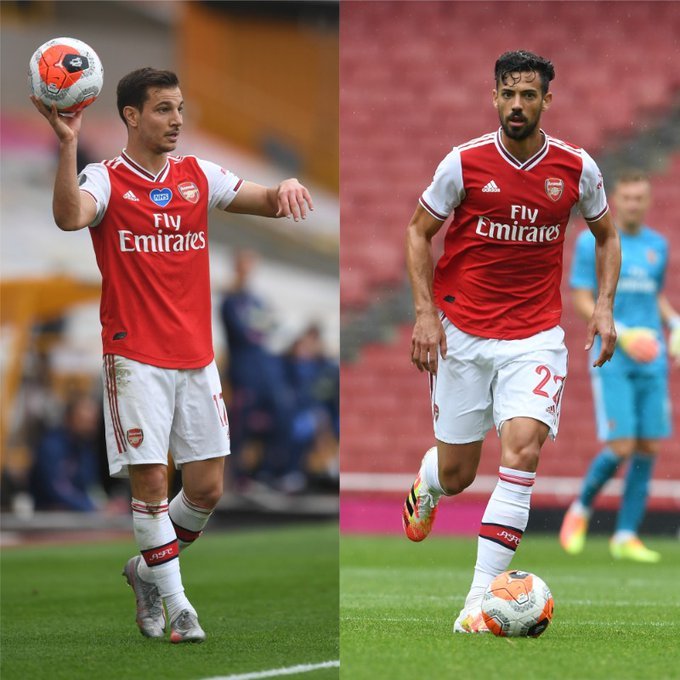 English premier league club, Arsenal on Monday announced that it has agreed deals for two major players to join the club on a permanent basis.

According to the club, an agreement has been reached for Pablo Mari and Cedric Soares to join the club on permanent deals.

“We have reached agreement with both Pablo Mari and Cedric Soares to join the club on permanent deals,” the club statement noted.

✍️ We have reached agreement with both Pablo Mari and Cedric Soares to join the club on permanent deals.

Below is the full club statement on the deal for the two players.

“Both players joined us initially on loan in January, and after impressing on and off the pitch over the past eight months, all parties have agreed to make their moves permanent.”

“Spanish defender Pablo signs from Brazilian side Flamengo. He made three appearances for us before his ankle injury during the Premier League match at Manchester City – the first fixture after the restart.”

“The 26-year-old joined Flamengo from Manchester City, where he had been since 2016. The left-footed central defender spent his time with City on three different season-long loan spells – in Spain with Girona for the 2016/17 season, then to the Netherlands with NAC Breda in 2017/18, before returning to Spain for the 2018/19 campaign with Deportivo La Coruna.”

“Mari developed his youth career in Spain with RCD Mallorca, where he made his La Liga debut at the age of just 17. Three years later in 2013 Mari joined Spanish side Gimnastic, where he made nearly 100 appearances in his three seasons with the Catalonian club.”

“Portuguese defender Cedric joins us permanently from Southampton, where he appeared over 100 times. He made five Premier League appearances for us during the restart, scoring on his debut in our 4-0 home victory over Norwich City.”

“The 28-year-old started his career at Portuguese club Sporting Lisbon, developing through the youth ranks before making his first-team debut in the Portuguese Primeira Liga at the age of 19.”

“An experienced international, Cedric has made 33 appearances for his country. He featured in the 2018 World Cup and was also part of the Portugal squad which won the European Championships in 2016. During his career, the defender has also had spells on loan at Academica in Portugal and Inter Milan in Italy.”

“We welcome both Pablo and Cedric to the club on a permanent basis and look forward to their continued contributions.”

“Both deals are subject to the completion of regulatory processes.”