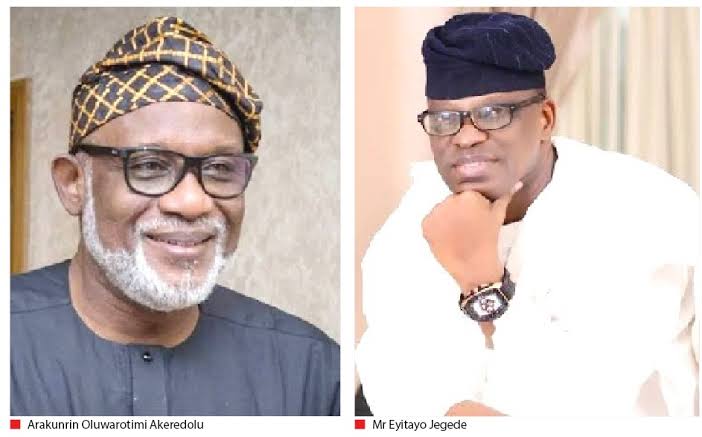 The Governorship election in Ondo State is getting serious daily with the governorship candidate of the All Progressives Congress, Rotimi Akeredolu and the candidate of the Peoples Democratic Party, Eyitayo Jegede, battling over an endorsement by the Accord Party.

Information gathered revealed that Jegede had celebrated over the alleged collapse of the Accord party structure to support his candidature in the coming election.

The spokesperson of the Ondo State chapter of PDP, Kennedy Ikantu Peretei in a statement had said that “the Accord Party has collapsed its structures in all the 18 Local Government Areas and 203 Wards across the State to support the PDP Flagbearer, Mr. Eyitayo Jegede, SAN.”

According to Peretei, Dr Ambode was accompanied to the meeting with leaders of the state PDP by Comrade Dele Fasan, Mrs Adigun Oluwatoyin, Dr. Akinmuyise Matthew who claimed to be leaders of the party in the state.

Ambode also promised Jegede that himself and the Accord party was “ready to cooperate and fuse with the PDP at all levels to force the clueless APC government out of Ondo State.”

Peretei further said that Ambode and others pledged to “deliver votes that will not be less than 100,000 for Eyitayo Jegede come October 10, 2020.”

“A number of PDP leaders also attended the meeting and they include State Working Committee Members, Board of Trustee Members, Chief Segun Adegoke, Ambassador Omolade Oluwateru and Chairman Elders Committee, Dr. Tayo Dairo were all present to seal the deal.”

However, the Chairman of Accord Party in Ondo State, Ajibola Falaye, disowned Ambode and asked Jegede to stop celebrating fake endorsements.

Falaye while speaking with journalist denied that the party has collapsed any of its structures for the PDP’s candidate.

“The Accord Party has its own governorship candidate as well as deputy who were duly elected at the party’s primaries.”

Falaye who described the development as embarrassing, stated that Ambode who spearheaded the team had been suspended from the party six years ago while his “cohorts” who accompanied him to the PDP secretariat are unknown to the party.

“We were made to understand that the person that led the strange members of Accord Party to the PDP secretariat was one Dr. Ambode.”

“In politics, there is free entrance and free exit. It is not a new thing if you are leaving a party for another one but in this case, the so called Ambode and his cohorts are not members of our party. Ambode has been expelled from the party by the National Secretariat almost six years ago.”

Falaye who condemned PDP for not verifying the true identity of the self-acclaimed Accord Party members stated that the action is threat to democracy.

“So, for the PDP to say that they are welcoming the strongest set of people from Accord Party is very very serious because it doesn’t help democracy. A situation whereby people are coming to you and you don’t bother to confirm their authenticity is dangerous.”

“For the avoidance of doubt, Accord party did primaries and we have Rotimi Akindejoye as the governorship candidate and he also has a deputy.”

“Our investigation also revealed that a particular officer of the party in the person of Reverend Adebayo Adeniyi who is a member of the party’s Board of Trustees, BoT has been mingling with PDP and its governorship candidate, Eyitayo Jegede. All these people are just looking for cheap popularity and money, and they are not known to Accord Party.”

However, the national leaders of the party threw their weight behind Rotimi Akeredolu, the candidate of the APC.

The Accord Party represented by its National Secretary, Hon (Dr) Adebukola Abiola-Ajaja during a solidarity visit to the Akeredolu in Akure described as embarrassing, the purported statement that the Accord Party had collapsed it’s structure for the PDP, saying it was an unguarded statement from elements unknown to the party.

The State Chairman of the Party Dr Ajibola Falaye and other state officers including the State Woman and Zonal Woman Leaders were in attendance during the partys national leaders visit to Akeredolu.

Abiola-Ajaja said that the National Leadership of the Party had to come to put the records straight adding that the party has alot of reasons to support Governor Akeredolu whose attitude to good governance, she said, has always excited Accord Party.

“We were greatly disturbed when we heard that some people who claimed to be members of Accord Party have collapsed their structures for Jegede.”

“We quickly called the state Chairman who said such persons were not our members in the state.”

“Mr Governor, I have the mandate of my National Chairman to come on this solidarity visit to assure you that we are solidly behind you and that by the Grace of God, you will succeed”, she said.

The National Vice-chairman, Southwest of Accord Party, Dokun Babarinde, while speaking during the visit said there was no way the party could have supported any other person except Akeredolu whose chance of getting reelected was brighter than any other person in the October 2020 gubernatorial election in the state.

Akeredolu in his response appreciated the Accord Party and assured that he will not betray the confidence reposed in him by the party and other political parties.

Akeredolu said he has unyielding desire to make Ondo State first among equals where every resident would be able to actualise their potentials.