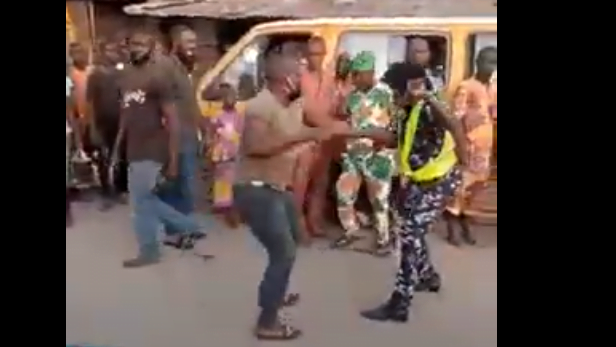 Lagos State Command of the Nigeria Police Force has confirmed the arrest of one Yemi Ayeni, a dismissed army personnel who brutalised a policewoman.

Confirming the arrest on Thursday, August 13, Lagos State Police Public Relations Officer, Bala Elkana told reporters that the victim, Inspector Martina Onyeacho was discharging her duty when the former soldier descended on her with punches.

Elkana disclosed further that the incident happened in the evening hour of August 9, at Ilemba Hausa.

According to him, the police command at about 5:30 pm received a distress call that Onyeacho who is on traffic control duty at Shibiri Bus Stop was attacked. “Upon receiving the report, a patrol team was sent to the scene, rescue and took the female officer to the hospital for treatment,” the police spokesman was quoted saying.

Naija News learnt that the officer sustained various degree of injuries from punches and beating of stick from Ayeni.

Reports had it that the incident started after Onyeacho ordered a commercial vehicle carrying Ayeni to move away from where he was parked due to obstruction. The female officer’s order, however, resulted in an argument with the disband army officer who descended on her that, claiming she did not accord him respect.

According to Ayeni when paraded, he had spent four months in the Nigerian Army Depot, Zaria, Kaduna State in 2002. Adding that he was dismissed from training on mental health grounds but has been posing as a soldier.

However, Elkana in his statement noted that Ayeni will be charged to court soon after investigation if over.

In another news earlier, a young Nigerian man who was arrested for arm robbery and cases of rape has demanded that he should be killed.