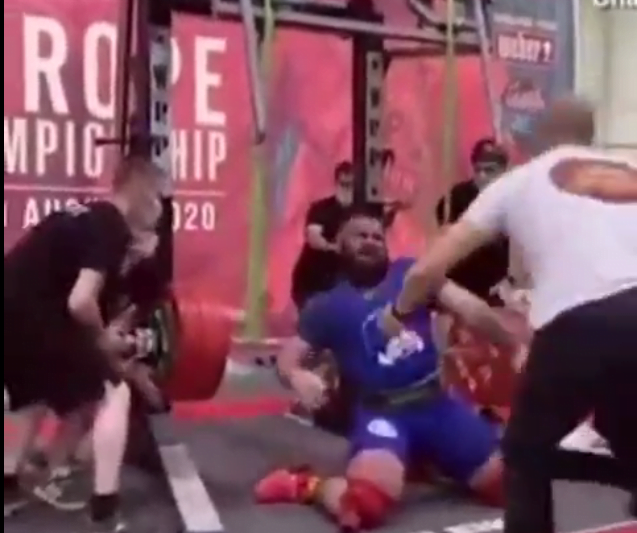 A Russian powerlifting champion has lost his two knees while trying to squat with 400kg weight during a competition.

Naija News understands that the horrible occurrence happened while the defending champion who goes by the name Alexander Sedykh was competing in the World Raw Powerlifting Federation (WRPF) European Championships not far from Moscow.

As seen in the fearful video, Sedykh had beside him four men helping out in monitoring the exercise and as well to save him from the unforeseen. However, the powerlifter whose legs were already shaking while holding the weight on his shoulders, lose guard at the moment he attempted to squat with the enormous weight.

Luck ran out of Russian powerlifting champion as both of his knees buckled horribly, and he cried out in anguish. It was reported that the powerlifter fractured both legs and also ruptured his quadriceps muscles during the incident.

Sedykh was rushed to the hospital and had to undergo emergency surgery on his legs.

Reacting to the horrible experience, Sedykh who would have to leap for sometimes now said; “The main thing is that I must lie motionless in bed for two months.”

“Then I’ll be taught how to walk again. It’ll take time to recuperate. I’ve had my quadriceps resewn and my knees put back together.”

According to him, he will continue his weightlifting career after recovery.

Watch the graphics video below;

In another news, Naija News reported that a Nigerian lady, Immaculate Okochu has been crushed to death by a truck in the Ajah area of Lagos State just a few days to her wedding.