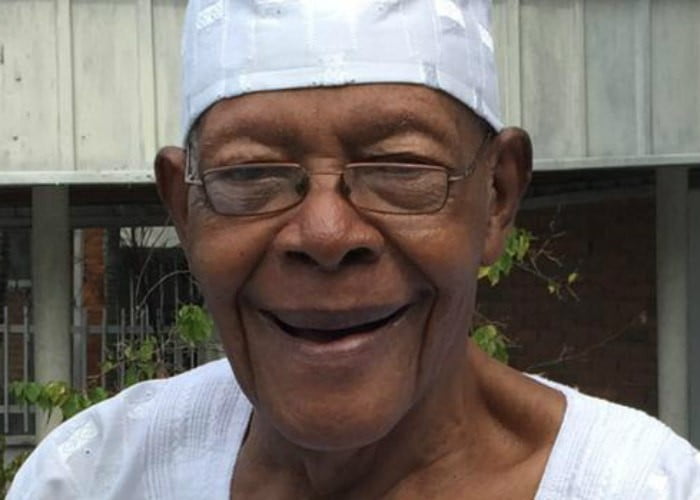 The death of a prominent Lagos socialite, Chief Nathaniel Folarin Coker has been confirmed by his family on Thursday.

The family disclosed that Chief Coker died peacefully in his sleep on Wednesday night at the age of 97.

The family statement signed by the deceased’s eldest child, Folorunsho Coker noted that he died after a brief illness adding that burial arrangements will be announced later.

“It is with a heavy heart and a deep sense of appreciation to Almighty God that we announce the translation to the eternal glory of our beloved father, grandfather, uncle and patriot Chief (Elderman) Nathaniel Folarin Coker OON.

“He died comfortably and peacefully in his sleep in Lagos on the 12th of August 2020 at the ripe old age of 97 years,” the statement read.

“His life so beautifully lived which deserves to be beautifully remembered. He dutifully and meritoriously served his state and country in his lifetime, and we, his family are very proud of his life and service.

“We are comforted by the fact that his good name is worth more than gold and that his memory will always be a blessing to each and every one of us all. Burial arrangements will be announced in due course.”

Reacting to the news of his death, Governor Babajide Sanwo-Olu of Lagos State in a statement on Thursday by Mr. Gboyega Akosile, his Chief Press Secretary, described the passing of the late Chief Nathaniel Folarin Coker as a great loss to the State and Nigeria as a whole.

Sanwo-Olu said the late Folarin Coker was one of the front-runners in the race towards making Lagos a leading State in Nigeria and the West Africa sub-region.

The Governor said the late Coker’s contributions to the State’s public service as Permanent Secretary in different ministries are exemplary. He said the late administrator effectively combined work and social life in a way that impacted the State positively.

In his words: “the late Folarin Coker lived a very good life. His demise, though a great loss to our dear State, should be celebrated. He served Lagos meritoriously as a public servant in various capacities, contributing his quota to the growth narratives of Lagos.”

“The late Chief Coker was also a socialite of note. I remember that as a young man, I always admired his candour whenever he spoke at social gatherings. He was a representation of the true spirit of Lagos.”

“His service to our dear State as Permanent Secretary took him to various ministries such as Education; Youth, Sports and Social Development, Trade, Mines and Natural Resources as well as the ministry of information and tourism, where he contributed meaningfully to the better and bigger Lagos narrative.”

“I pray for his soul to find peace with his creator. May God grant the family the fortitude to bear the irreparable loss.’’