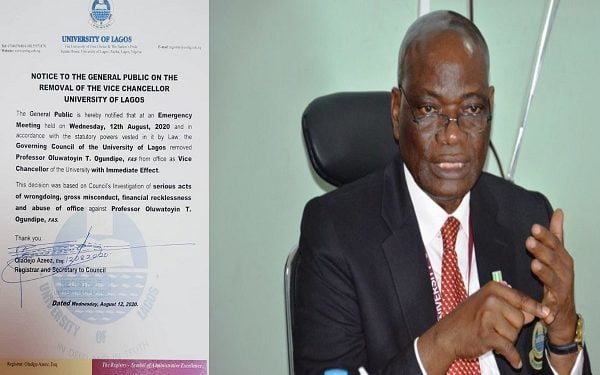 The embattled Vice-Chancellor of the University of Lagos (UNILAG), Prof. Oluwatoyin Ogundipe, has headed for the court following his removal from office by the university governing board.

Recall that the governing council of the University of Lagos (UNILAG) on Wednesday sacked the Vice-Chancellor of the institution, Professor Oluwatoyin Ogundipe.

The council announce his removal during the meeting of the Governing Council of the institution which held at the National Universities Commission (NUC) building in Abuja today.

The action was, however, rejected by the Senate of the institution.

Meanwhile, the Governing Council of the University of Lagos (UNILAG) has appointed Professor Omololu Soyombo as Acting Vice-Chancellor of the university.

Ogundipe’ leading constitutional lawyer and human rights activist, Chief Mike Ozekhome SAN, has headed to court to challenge his alleged illegal removal from office and redress the wrong done to him.