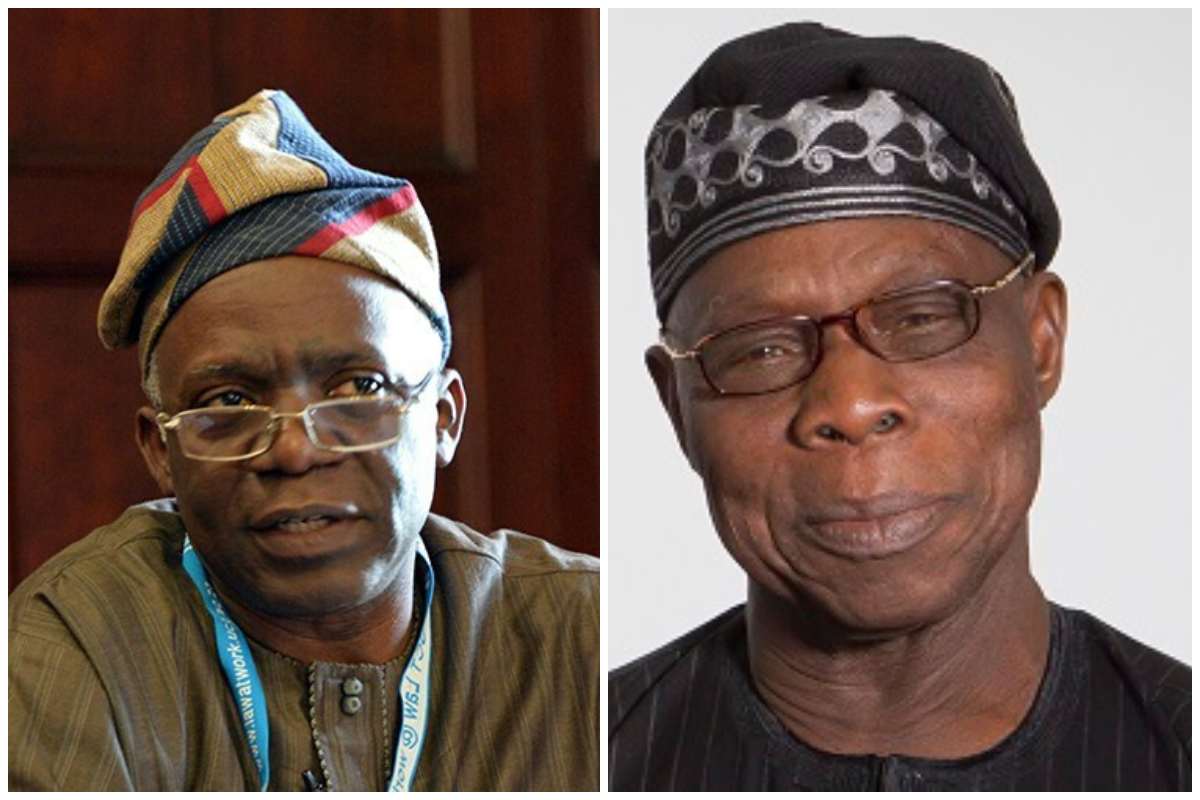 Femi Falana (SAN) has berated former President Olusegun Obasanjo for backing the alleged criminal activities of the late Senator Buruji Kashamu when he was alive.

Naija News reports that Kashamu, a governorship candidate of the Peoples Democratic Party (PDP) in the 2019 election in Ogun State, on Saturday died of COVID-19 complications age of 62.

Kashamu, who also represented Ogun East Senatorial District between 2015 and 2019 at the National Assembly, will be buried on Sunday [today] in accordance with Islamic rites at his Ijebu-Igbo hometown.

The lawmaker had faced extradition to the United States for alleged drug trafficking until his death.

But in a condolence message to Governor Dapo Abiodun, Obasanjo described Kashamu death as a great loss.

The letter said: “I have received the sad news of the death of Senator Esho Jinadu (Buruji Kashamu), a prominent Ogun State resident. I extend my heartfelt condolences to my family and friends.

Reacting in a statement titled, ‘Matters Arising From Chief Obasanjo’s Condolence Letter,’ Falana pointed out that Obasanjo did not abuse African tradition by criticising the late ex-Senator, Buruji Kashamu.

But the human rights lawyer urged the former head of state to “stop insulting the collective intelligence of the Nigerian people.”

Falana said: “Some people have said that it is against the African culture to speak ill of the dead. That is far from the truth. In the past, Africans spoke ill of the dead and exposed the dead if they were found to have engaged in abominable activities that brought shame to a community. In fact, the bodies of dead men and women who were found to have brought pestilence to a community were buried in the bush.

“Therefore, Chief Obasanjo has not abused the African culture by attacking the late Senator Buruji Kashamu for allegedly manipulating the law to escape justice at home and abroad. However, it is the hypocrisy of his message that should be criticised because it is against the African culture to aid and abet a criminal suspect in his lifetime only to turn round to attack him in his grave.

“In 1999, the British Government had initiated moves for the extradition of Kashamu to the United States for trial for drug-related offences. But the evidence given in favour of Kashamu in 2003 by the National Drug Law Enforcement Agency (NDLEA) under the Olusegun Obasanjo administration cleared the suspect of drug charges. Consequently, the British Court rejected the request to extradite Kashamu on grounds of uncertainty about his identity and freed him after 5 years in jail. Thereafter, Kashamu returned to the country as a free man and was admitted to the PDP as a full-fledged member. He funded the party and became a political leader.

“The national leadership of the party acknowledged Kashamu’s immense financial contributions to the PDP. In 2014, as a result of political disagreements in the Ogun State chapter of the PDP, former President Obasanjo asked the national leadership of the PDP to stop extolling Kashamu as a political leader because he was “a habitual criminal wanted abroad to face criminal charges levelled against him…” But following the resolution of the intraparty feud, Chief Obasanjo mounted the rostrum in Ogun State, extolled Kashamu as a political leader and prayed to the Almighty God to reward him for his generosity.

“Upon Kashamu’s sudden demise last weekend due to complications arising from COVID-19 attack, Chief Obasanjo sent a sarcastic condolence letter to Governor Dapo Abiodun of Ogun State. While praying for the repose of the soul of the deceased Chief Obasanjo said that in his lifetime he had manoeuvred “law and politics to escape from facing justice on alleged criminal offence in Nigeria and outside Nigeria. But no legal, political, cultural, social or even medical manoeuvre could stop the cold hands of death when the Creator of all of us decides that the time is up.”

“In defending his condolence message Chief Obasanjo recalled that: “When I was growing up, in our community, when anyone known with bad character died, we usually only mourn him and bury him. No eulogy. No praise-singing.” Since Chief Obasanjo believes that “The life and history of a lifetime of the departed have lessons for those of us on this side of the veil” the political leaders who frustrated his extradition from the United Kingdom, welcomed him back home and used him to build political structures should stop insulting the collective intelligence of the Nigerian people.”