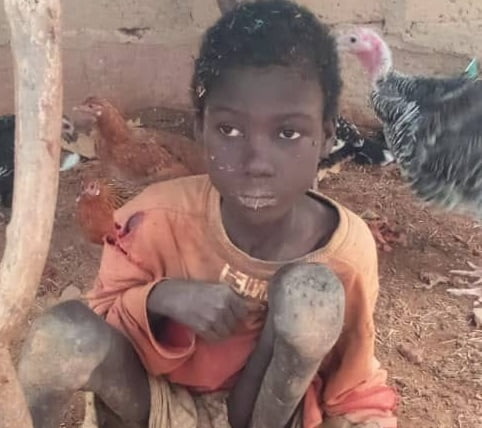 A boy suspected to be 10 years of age has been rescued from his step-mother who locked him up with birds and other animals for two years.

Naija News understands that the young boy whose name is revealed as Jibril Aliyu had lost his mother two years back, and has since then been ill-treated by his step-mother in Kebbi State.

As seen in the now-viral video shared by a Facebook user, Maryam Shetty, the teenager has become weak and tattered as a result of long malnourishment and torture by the woman described as ‘wicked’ by many.

However, the boy has been rescued and admitted to the Sir Yahaya Memorial Hospital in Birnin Kebbi, the state capital, while the wicked stepmother is as well arrested and handed to the police, Naija News understands.

From one of the videos shared by Shetty on her social media account, the alleged stepmother of the boy could be seen interacting with police officers rudely, showing no act of remorsefulness. The woman when questioned why she tied the boy in such a place and not also giving him food, denied the allegations.

According to Maryam Shetty in her caption while sharing the video, “the boy has lost his mother a few years back, and his alleged guardian subjected him to eating from remnants of food and animals’ dung.”

She condemned the woman for her response even in police custody, describing her as ‘evil’ for showing no remorse.

“Videos of an evil remorseless woman from Kebbi State that tied up an orphan who lost his mum for 2 whole years like a goat! He is impoverished and only ate from remnants of food and animal’s dung. Such cruelty….” said Shetty.

On his part, when contacted on the incident, the spokesman for Kebbi Police Command, confirmed the arrest of the woman whose name is yet to be revealed, noting that she is now in police custody.

He noted that the police command is still investigating the matter and would charge the culprit to court when done.

Meanwhile, Shamim, a lady from Embakasi, a division of Nairobi, the capital of Kenya is on the verge of ending her 10-years-old marriage with her husband after discovering he was a garbage collector all this while.