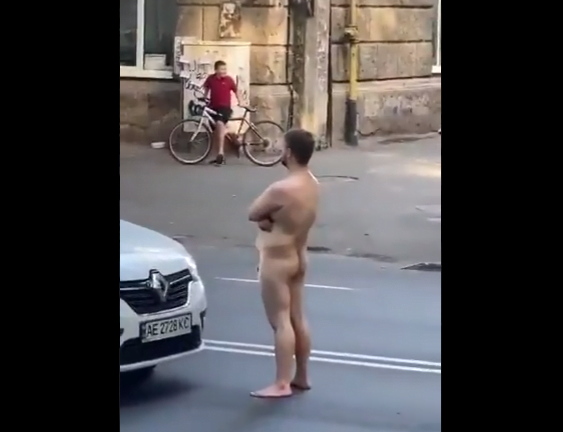 A man whose sanity is yet to be confirmed has been knocked out by an angry driver after standing naked for minutes to obstruct heavy traffic.

As seen in the video shared by an American journalist identified on the microblogging site, Twitter, as Adam [@adam22], the man stood in the middle of the road while cars queued up to wait for him to leave the road.

Naija News understands that the man whose identity is yet unknown stood completely naked with his arms crossed across his chest, forcing cars moving on the part to stop.

However, the driver of the car directly in front of him who could not wait any longer dropped from his car and approached the naked man. After a few minutes of exchanging words with him and he shows no interest to move out of the road, the driver angrily knocked him down in the face leading to his collapse.

Watch the video below as shared by Adam;

Something really gratifying about seeing a naked guy get knocked out for blocking traffic pic.twitter.com/xBIzqxLAtN

Meanwhile, Naija News reported in another news that two young men suspected to be responsible for the abduction of four persons returning from a burial ceremony in Enugu State have reportedly escaped police arrest.