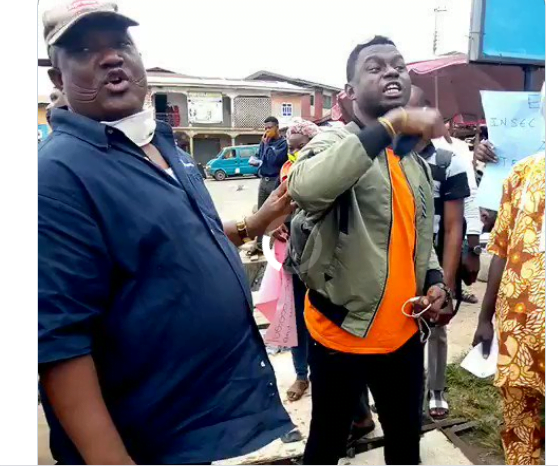 A supposed peaceful protest by members of the #RevolutionNow in Osun State capital, Osogbo, on Wednesday, August 5 ended abruptly after men of the Department of State Services, DSS began to arrest protesters.

Naija News reports that some Nigerians under the aegis of the #RevolutionNow movement took to the streets of some major cities in the country on Wednesday to protest against the actions of the Nigerian government.

Also, Olawale Bakare, co-convener of the #RevolutionNow who led members of the group to a protest at the popular Olaiya junction in Osogbo was arrested, Naija News reports.

The Wednesday exercise, however, turned sour for the #RevolutionNow protesters as videos showing moments they were arrested and assaulted by the security operatives continued to emerge.

See below some of the videos;

#RevolutionNow Policemen disrupt a peaceful protest in Osun State, Osogbo. Protesters were arrested for only speaking the rights and voicing out their ills. We are all in this mess together, but the Oppressing Tools doesn't want to know. pic.twitter.com/FibZTYM7H1

The below video was reportedly captured in Abuja.

Police attack #RevolutionNow members at Unity Fountain in Abuja, protesters arrested and are being brutalized. pic.twitter.com/5HQduLMenm