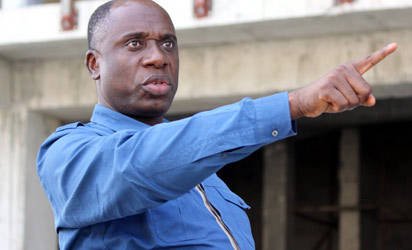 Naija News recalls that the House of Representatives had last week summoned Rotimi Amaechi, the Minister of Transportation; Zainab Ahmed, Minister of Finance, Budget and National Planning and Alhaji Isa Pantami, Minister of Communications and Digital Economy, over a loan agreement with China, which contained the waiver clause.

Article 8(1) of the commercial loan agreement signed between Nigeria and the Export-Import Bank of China, according to the House of Representatives, concedes Nigeria’s sovereignty to China.

Also condemning moves to secure loans from China, Katch Ononuju, a chieftain of the Peoples Democratic Party (PDP), accused Amaechi of perpetrating fraud under the guise of securing funds for railway projects.

The PDP lao called on the Minister of Transportation to resign.

But reacting in an interview with Channels TV, Amaechi said the loan being referred to by the PDP chieftain was actually taken by ex-President Jonathan.

The former Rivers State governor described calls for his resignation was unnecessary.

Amaechi said: “There’s a gentleman who went to AIT, and said ‘oh I should resign’ and I wonder which university he graduated from, certainly not University of Port Harcourt,” Amaechi said.

“He said I should resign. Resign from what? Are you saying those projects weren’t executed? Is there no Kaduna-Abuja railway?

“By the way, he said he is PDP; that loan was taken under President Goodluck Jonathan’s government.

“The loan he’s talking about — the Kaduna-Abuja railway — was signed by the President Goodluck Jonathan government.

“Don’t forget that we told the whole world when commissioning that project, that 80 percent of that project was executed by President Goodluck Jonathan’s government.