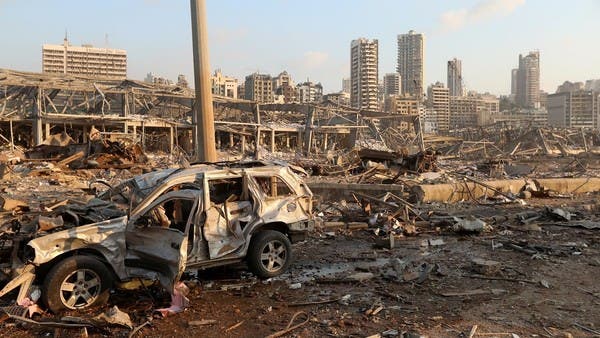 Bodies lying on the ground, carcasses of cars and flattened warehouses. At the port of Beirut, two huge explosions Tuesday caused scenes of devastation, left 50 dead and 2,750 injured, sowing panic in the Lebanese capital.
In a statement by an official about the origin of the blasts, the director-general of the General Security, Abbas Ibrahim, indicated that they were perhaps due to “explosives confiscated for years”, but added wait until the end of the investigation.

At the end of the afternoon, a first explosion was heard followed by another very powerful which caused a gigantic mushroom in the sky. Buildings shook and the windows were smashed several miles from the blast scene. The wave of the blast was felt as far as the island of Cyprus about 200 km away.

In the streets, soldiers evacuated stunned residents, some covered in blood, their T-shirts around their heads to heal their wounds. Volunteers helped others find assistance. In the port, carcasses of cars one on top of the other, the framework of warehouses on the ground. “It’s a disaster inside. There are corpses on the ground. Ambulances are taking the bodies away, ” a soldier near the port told Nigeria News. A man in tears was trying to hear from a soldier about his son who was in port.

Several hours after the tragedy, helicopters continued to pour downpours in an attempt to extinguish the flames. President Michel Aoun has called an “urgent meeting” of the Supreme Defense Council and Prime Minister Hassan Diab has declared a day of national mourning. Without mentioning the exact causes of the tragedy, Mr. Diab said those responsible for this “disaster” should “be held to account”.

In Israel, a neighbouring country which has carried out several military operations in recent decades against Lebanon, a government official told Nigeria News on condition of anonymity that his country had “nothing to do with the incident”.

“It was like an atomic bomb. I saw everything, but nothing like it, ” Makrouhie Yerganian, a retired professor, who has lived in front of the port for more than 60 years, told Nigeria News. “All the surrounding buildings collapsed,” he said. According to the National News Agency, the explosions caused significant damage to the Presidential Palace of Baabda, located about fifteen km from the center of Beirut: glass shattered and windows and doors blown out.

The port sector has been cordoned off by the security forces, which only allow civil defence, ambulances with screaming sirens and firefighters, according to Nigeria News correspondents at the entrance to the port. “We saw some smoke and then an explosion. Then the mushroom. The force of the explosion propelled us back into the apartment, ” said a resident of the Manssouriyeh neighbourhood, several kilometres from the port.

Cars, with their inflated airbags, but also buses were abandoned in the middle of the roads. Houses near the port were heavily damaged by the explosions.

A ship docked opposite the Port of Beirut caught fire after the explosions, but it was not possible to determine if there were any passengers on board. According to witnesses, the blasts were heard as far as the coastal town of Larnaca, Cyprus, just over 200 km from the Lebanese coast. “I felt like an earthquake and then after a huge explosion and the windows broke. I felt that it was stronger than the explosion during the assassination of Rafic Hariri, ” said a Lebanese woman in Beirut.

On February 14, 2005, a spectacular attack by a van loaded with explosives targeted Rafik Hariri’s convoy, killing him and 21 others and injuring more than 200. The explosion had caused flames several meters high, blowing the windows of buildings within a radius of half a kilometre.

On Friday, the Netherlands-based Special Tribunal for Lebanon (STL) is due to deliver its verdict in the trial of four men, all alleged members of the powerful Lebanese movement Hezbollah, accused of participating in the assassination.

The tragedy of Tuesday adds to the plight of the Lebanese. Their country is experiencing its worst economic crisis in decades, marked by unprecedented monetary depreciation, hyperinflation, massive layoffs and drastic banking restrictions, which have fueled social discord for several months.

Abroad, France has announced the delivery of “French aid and resources” to Beirut and the United States has said it is ready to offer “any help possible”.

Many Injured As UN Plane Crashes In Mali