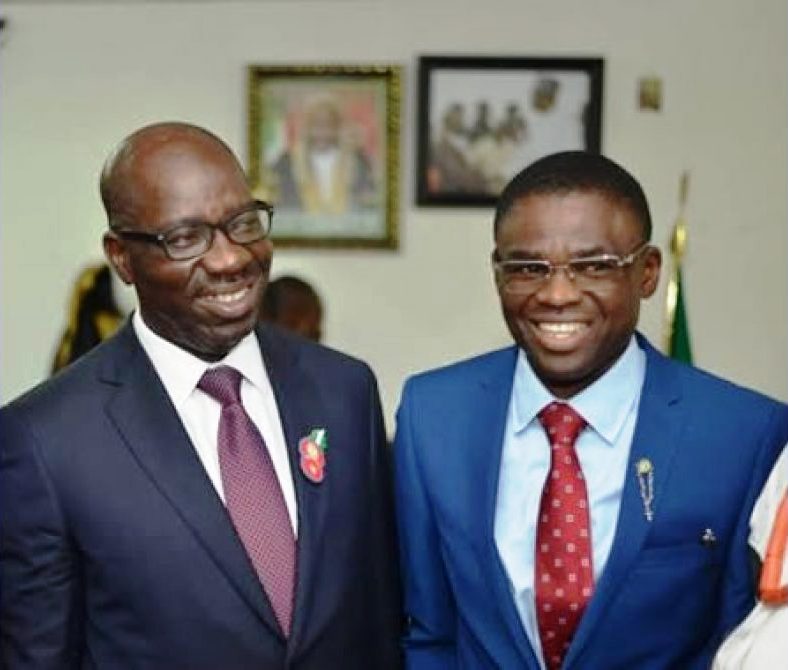 The Peoples Democratic Party (PDP) may find it more difficult than initially thought to defeat the All Progressives Congress (APC) in the Edo Governorship election as reports have emerged alleging a clash between Governor Godwin Obaseki and his deputy, Philip Shaibu.

Naija News reports that the clash between the duo was allegedly due to the delay in the release of campaign funds.

The clash was reported to have happened during a leadership meeting on Thursday with Obaseki, Shaibu, the Secretary to the State Government (SSG), Osarodion Ogie, Charles Idahosa, and Senator Domingo Obende.

The trouble started when Obaseki commenced the meeting by saying all hands must be on deck to be able to defeat APC. But Shaibu raised his hands to speak.

Speaking, Philip Shaibu allegedly told the governor point-blank that he was not serious about winning the coming election.

He reminded the governor that different committees were set up in the past two weeks but Obaseki had refused to fund them, lamenting that the APC has been in a serious campaign while nothing has happened regarding the PDP campaign.

Shaibu allegedly said, “We have been sitting here doing nothing while Oshiomhole is all over the town. We are losing members every day and all we do is setting up committees every day without funding. I will not take this, you pushed me into fighting a man that made me what I am today, yet all we are seeing everyday is committees with no funding.

“Mr. Governor, I see you don’t understand what this election is all about. You are not serious about it. Do you think it is the little boys carrying laptops here that will do it? If you don’t want to fund the election, then, I have no business being here. I will back out.”

Attempts by Osarodion Ogie to make Shaibu stop proved abortive, as the deputy governor allegedly told the SSG to shut his mouth and sit down.

But Idahosa, a leader from Uhumwonde, allegedly, stood up and backed Shaibu, expressing his fear that Oshiomhole would come after them if they lose the governorship election. He urged the governor to release money for the campaign.

Obaseki, whom a source close to the meeting said looked visibly confused at that moment, requested for the budget of each of the six committees. This request by the governor, the source said, further infuriated Shaibu, who thundered that he was still asking for the budget when APC had been campaigning day and night. He warned the governor that if nothing serious was done, he would walk back to his APC, which he said he left in pains.

However, the chief press secretary to the deputy governor, Mr. Musah Ebomhiana and special adviser to Obaseki on media and communication strategy, Mr. Crusoe Osagie both denied any such clash.

“It is a wicked rumour, there is no iota of truth. I really don’t know where that is coming from. It is street talk with nothing to it. The relationship between my boss and his boss, that is the governor, is very cordial. The committees have since been inaugurated and the campaign is going on. So there is no truth in it. It is a figment of the imagination of those peddling it,” Ebomhiana said.

“The lie that there was a clash between the governor and his deputy should be dismissed in its entirety. Whatever incident they allude to only exists in the imagination of the purveyors.

“There was, indeed, a meeting with key stakeholders of the Peoples Democratic Party (PDP), which ended with everyone in high spirit. There was a spirit of cordiality and everyone shared their ideas and inputs on how to deliver the party in the September 19 governorship election,” Crusoe Osagie added.

Obaseki would slug it out against the candidate of the APC, Pastor Osagie Ize-Iyamu.