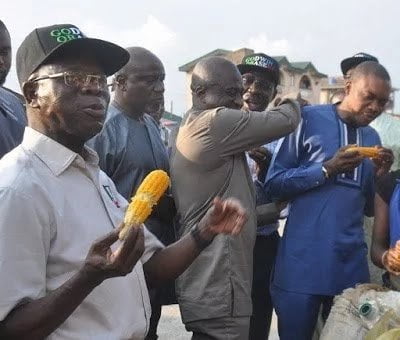 The former National Chairman of the All Progressives Congress, Adams Oshiomhole, has been spotted on the streets eating corn ahead of the Governorship election in Edo State.

Recall that the former Governor of Edo State used the same strategy when he was campaigning for Governor Godwin Obaseki in 2016.

Obaseki who contested under APC then was seen with his predecessor chewing roasted publicly in 2016.

However, Oshiomhole has returned to the streets to patronize the corn sellers but this time around he is without his companion in 2016, who has dumped the party for the Peoples Democratic Party following his disqualification from the APC governorship race.

Oshiomhole in the video making rounds is seen standing in front of a roadside corn seller as some passersby circled him, chanting: “Osho baba!”

The former Edo State Governor is back to the street to campaign for the Governorship candidate of his party, Osagie Ize-Iyamu who was Obaseki’s opponent in 2016.

– Edo state Residents sing in joyful praises as Oshiomhole hit the street to buy roasted corn from a road side corn seller.