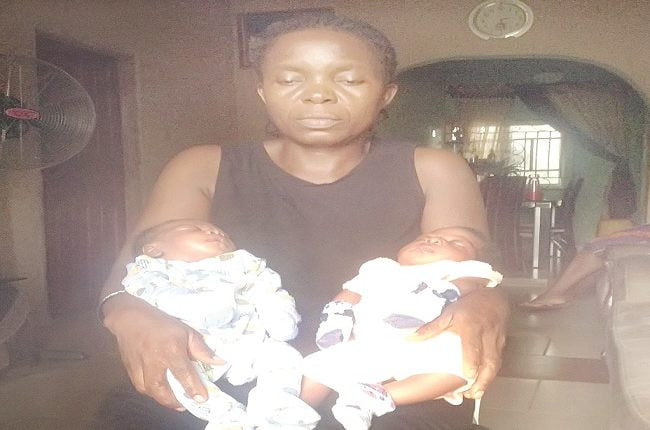 A Nigerian coupled who have just witnessed first child delivery after eighteen years of marriage have been left in sorrow after the mother of the children died a few days after delivery.

According to the husband and father of the twins, they had their first wedding in 2002 and had waited since then for a child until now.

Speaking to newsmen in an interview, Mr Ediri Voghor, who hails from Delta state disclosed that he married his wife, Chika Anthonia Voghor, an indigene of Umunachi Mmukoro in Isiala Mbano Local Government Area of Imo State, and had lived with her for eighteen years trusting God for a child.

According to him, they both have searched for help medically and as well divinely but could nothing came up until this year. Unfortunately, Chika died three days after delivering a set of twins.

“We had our traditional wedding in 2002 and had our church wedding in 2003 at the St. Andrew’s Cathedral, Warri. From 2002, she didn’t get pregnant. During those years, we were everywhere looking for a solution. We went to different hospitals but the doctors said nothing was wrong with us. Over the years, fibroid was discovered and operated surgically. During the fibroid operation, there were no complications; everything went smoothly, still no child,” the patent medicine seller, Mr Voghor revealed.

He added, “Pressures were coming from everywhere; gossips and indirect mocking, but we held on to our faith in God. In fact, pressures helped to strengthen her faith in God. She so much believed in God. She laid all her hope in God Almighty that one day, God would bless her with children,” Mr Voghor disclosed.

Disclosing how his wife later had her first pregnancy, Mr Voghor said it was a happy day for them both after the wife was confirmed pregnant at the hospital following a complaint that she had a fever. According to him, though they were happy but had to keep the good news to themselves until it pushes out for everyone to witness it.

He said, “One-day last year, she told me she was down with fever and had also missed her monthly flow; we went to the hospital for a test and it came out positive! We were very happy but we kept the news to ourselves. We didn’t want people to hear it from our mouths. Pregnancy is not something hidden, no matter how much you try to hide it, it will surely show one day. So, we wanted people to know by seeing it. From there, we registered for antenatal at Lily Hospital. It was in that hospital that we did a scan, and the scan showed she was carrying a baby. Oh God! I was beside myself with joy! I cannot explain the feeling I had. The joy was so much that I shed tears of joy”.

He revealed further that her pregnancy turned 9 months old on June 21 and had the babies (a boy and a girl) delivered at the hospital via Caesarian operation as the doctor suggested.

She eventually got delivered of the babies and she was all happy for two days until the third day she gave up the ghost, Mr Voghor confirmed.

Meanwhile, Naija News reported earlier that an officer of the Nigeria Police Force (NPF), Sunday Gabriel, has allegedly severed a part of his wife’s leg with a machete just because he was served cold food.