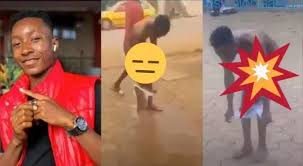 A video has gone viral on social media of a young boy who was caught while raping an 11 year old child, after he was told to do so in order to renew his oath for success with a secret cult.

He however ran mad after an angry mob took a hold of him, stripped him naked and started beating him.

Rumours had it that he ran mad in order not to expose the cult he belong to, or their identities.

He hails from Cameroon, the boy is also said to be an entrepreneur who is a trader, an engineer in food processing and investor.

Man Mistakenly Kills Lady Put Under His Care During Sex