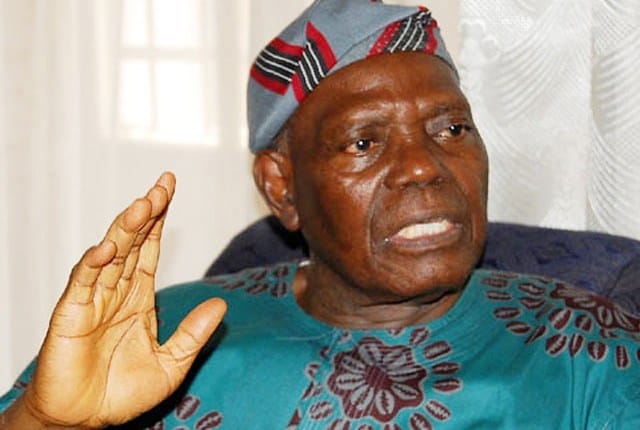 Ex-Osun State Governor, Chief Bisi Akande, has said the death of the late Afenifere leader, Pa Ayo Fasanmi has made him a political orphan.

The former interim National Chairman of the All Progressives Congress, Bisi Akande, has noted that the death of the late Afenifere leader, Pa Ayo Fasanmi, has made him a political orphan.

The former Governor of Osun State, in a tribute made available to journalists in Osogbo, described the Afenifere leader’s death as a great loss to the Yoruba nation and to Nigeria as a whole.

Akande in his statement revealed how the deceased introduced him to the former premier of Western Region, Chief Obafemi Awolowo and had played the role of a political godfather to him all along.

He said, “It is shocking and very painful to me personally because he was my political godfather since he introduced me to Chief Obafemi Awolowo in 1977.”

“We were together in the National Constituent Assembly that wrote the 1979 Constitution for Nigeria. His wealth of experience as a progressive politician is mostly needed now that Nigeria is gradually taking steps towards consolidating democratic norms, hence a big vacuum has been created by his exit.”

“He had consistently been a champion of democracy and good governance which he pursued till he breathed his last. His role in ensuring Yoruba has a place of its own in the politics of Nigeria will remain indelible while his contributions to the formation and sustenance of Afenifere, the pan Yoruba socio-political organisation can not be ignored.”