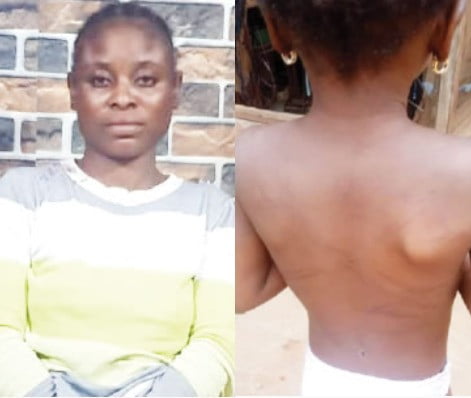 The Ogun State Command of the Nigeria Police Force, NPF has confirmed the arrest of a newly wedded wife in the state for allegedly maltreating her stepdaughter.

Reports has it that the woman was reported by a non-governmental organization, after discovering that she tortured the young girl who is said to be 6-year-old with nails all over her body.

Naija News understands that the disturbing incident was reported to the police by the Olanrewaju Omo-George Foundation, following a report from residence in Ijagba, in the Sagamu Local Government Area of the state.

Residents of the place where the horrific treatment was done on the young girl confirmed to the security agency that the new wedded wife, Abimbola, and her husband, Mr Taiwo Onabanjo has reserved no human sympathy for the child.

Speaking on the development, the foundation’s supervisor, Christopher Onuegbu, disclosed that the organization immediately reported to authorities upon receiving the complaint.

He said, “We received a distress call that a stepmother had been torturing a child with nails. The stepmother used the nails to inflict injuries on her head and body, and we asked for the location and the person said it was in Ijagba, Sagamu. I informed our secretary to report the incident at the Sagamu Police Station, where two policewomen accompanied our secretary to the address and arrested the stepmother.”

The husband was said to be arrested too after backing his wife for the wicked act where contacted. Naija News understands that the young girl has been taking away to a hospital for treatment, due to the injury she suffered on her head to toe.

“We are trying to locate the biological mother of the child, who is said to be in Ijebu-Igbo. Our foundation has decided to settle the victim’s medical bills and sponsor her education until she graduates from higher institution.”said Onuegbu.

On his part, the spokesperson of the state police command, Abimbola Oyeyemi “said the husband had been released. He added that the stepmother is being held and interrogated at the Sagamu Divisional Police headquarters while the victim has been taken to hospital for medical attention.”

He noted further that the suspect would be charged to court once the investigation is concluded.