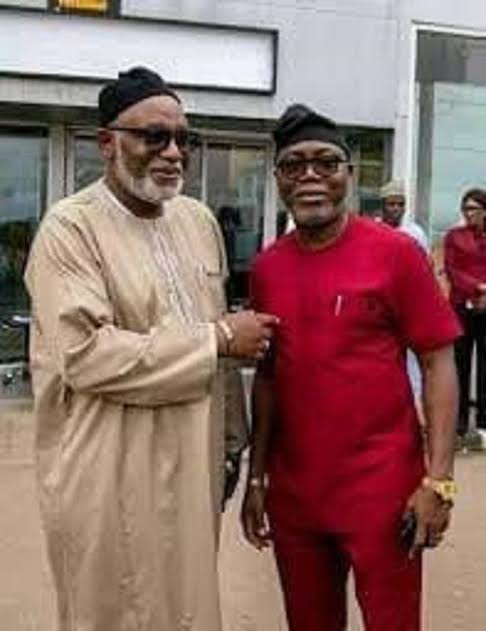 As our reporters reach out to confirm the insinuations, here are some information about the allegedly running mate, Aiyedatiwa.

Hon. Lucky Orimisan Aiyedatiwa was born to the family of Mr. Titus Akande and Mrs. Rosanah Moyebi Aiyedatiwa (of the blessed memory) on the 12th day of January 1965.

He is a native of Obe-Nla, a place known for oil-bearing in Ilaje Local Government Area of Ondo State.

He had his primary  school education at Saint Peter’s UNA (now FAC) Primary School, Obe Nla/Obe Adun in Ilaje LGA of Ondo State between 1970 and 1976. He then proceeded Ikosi High School, Ketu, Lagos, in 1982 for his secondary education.

After working as a classroom teacher and trying his hands on businesses, Aiyedatiwa later attended the University of Ibadan for Advanced Diploma in Business Administration with distinction in 2001.

He is an alumnus of Lagos Business School – Pan Atlantic University, Lekki, Lagos with Post Graduate Certification in Chief Executive Education (CEP) in Business Management in 2009.

In 2013, he graduated from the University of Liverpool, United Kingdom where he obtained a Master’s Degree in Business Administration (MBA).

He is currently the MD/CEO of Blue Wall Group of Companies which was established in 1996.

Aiyedatiwa joined active politics in 2011 as a card-carrying member of the Action Congress of Nigeria (ACN) and All Progressive Congress (APC) in 2014.

He was one of the National Delegates from Ondo State at the All Progressive Congress (APC) National Convention at Abuja in 2014.

He later became the House of Representative Candidate of the Party for Ilaje/Ese-Odo Federal Constituency in 2015 Presidential and National Assembly General Election.

Between 2018-2019, he was appointed by President Muhammadu Buhari as Federal Commissioner who represented Ondo State on the Board of Niger Delta Development Commission (NDDC).

Prior to his appointment by the President, he has also held other positions in other social and professional bodies. He was the National Public Relations for Association of Bureau De Change Operators of Nigeria (ABCON), 2004-2010. Chairman of South West Zone of ABCON, 2010-2011. Trustee/Treasurer, Ilaje League of Professional.

Hon. Lucky Aiyedatiwa is married and the marriage is blessed with Three Children.