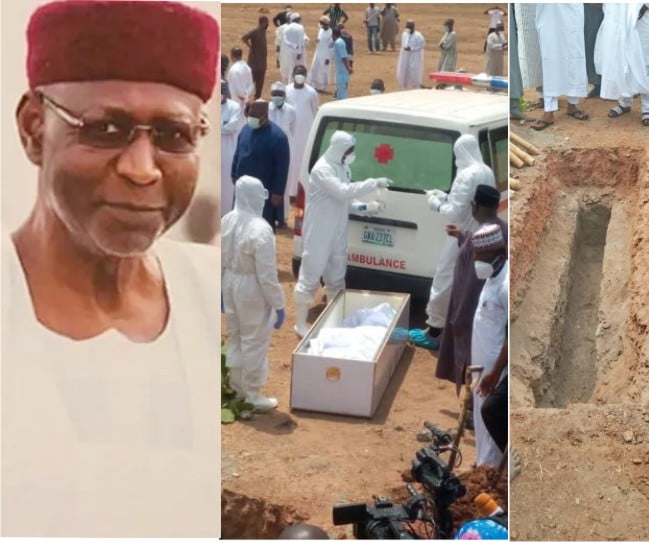 Abuja Magistrates Court on Monday, July 27 commenced hearing on a case filed against attendees of the funeral of Abba Kyari, former chief of staff to President Muhammadu Buhari.

Naija News understands that those who graced Kyari’s burial held on April 18, were charged with a criminal complaint for allegedly violating the COVID-19 disease rules and regulations during the exercise.

However, 12 appointees of President Buhari who are named in the violation of the health protocol were said to be absent at the court hearing today. Naija News learnt that none of them were present to answer their name when called by the court registrar.

Recall that the Nigerian lawyer who served as Chief of Staff to the incumbent President between August 2015 to April 2020 had died of COVID-19 pandemic on April 17. It could also be recalled that dignitaries present at his funeral accused of violating the COVID-19 rules as social distancing, wearing of the Coronavirus protective tools among other rules were not observed during the burial.

Names of people named in the alleged criminal suit include; the Secretary to the Government of the Federation, Boss Mustapha, who is also the Chairman, Presidential Task Force on Covid-19; the Minister of Aviation, Hadi Sirika; the Minister of Foreign Affairs, Geoffrey Onyema; and the Minister of Humanitarian Affairs, Disaster Management and Social Development, Sadiya Farouq.

Others also present at the funeral include the Senior Special Assistant to the President on Media and Publicity, Garba Shehu; the National Security Adviser, Babagana Moguno; the Director-General of National Intelligence Agency, Ahmed Rufai; the Chief Protocol Officer, Amb Lawal Kazaure; and the President’s Personal Assistant on New Media, Bashir Ahmad.

President Muhammadu Buhari’s Private Secretary and nephew, Yusuf Sabiu who is better known as Tunde; Special Assistant to the President, Musa Daura; and the National Coordinator of the Presidential Task Force on Covid-19, Dr. Sani Aliyu, were also named in the violation.

It was, however, reported that none of the above names was present at the hearing as none was there to answer to his name when the Chief Magistrate, Celestine C.M Odo ordered the court registrar to call out all the names of the defendants orderly.

Also, it was observed by Odo that a signature was not penned on the criminal complaint by the complainant. Tope Akinyode, a human rights lawyer, however, argued Odo’s complaint, noting that only the magistrate is required to sign the complaint and none other is stated mandatory by the law.

According to Akinyode, he filed an affidavit in compliance with Section 89 of the Administration of Criminal Justice Act which he duly signed.

Meanwhile, in another report earlier, 2019 presidential running mate of the Peoples Democratic Party (PDP) and former governor of Anambra State, Chief Peter Obi, has called on the federal government to invest more in education and economy.

The politician noted that while he agrees with the calls for the sack of the nation’s current service chiefs, that alone may not solve the challenges of insecurity in Nigeria.