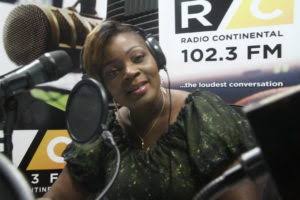 Naija News reports that Emmanuella Pobeni Adepoju, popularly known as Iya Jogbo, who was a presenter with Max FM before her death, died on Friday after a brief illness from bronchitis and an enlarged heart.

The statement reads as thus; “Whilst we struggle to come to terms with her untimely passing, our hearts and minds are focused solely on her beloved children and her immediate and extended family and friends.

“Emmanuella’s presence will be with us forever as she leaves a legacy of enormous talent and spirit from the almost 10 years she spent with the company as a key member of the much loved Wetin Dey show on Max FM.

“She will be deeply missed by us all and by her many thousands of fans who tuned in to hear her unique broadcasts every day,” the statement said.

Before her death, Iya Jogbo was popular with the Wetin Dey show on Max FM, Lagos.