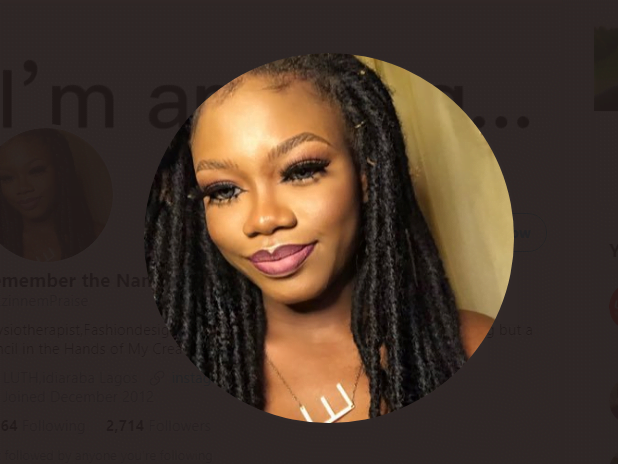 Nigerian Physiotherapist and Fashion designer identified as Ezinnem Praise [@EzinnemPraise] on the microblogging site, Twitter, has caused reactions among netizens after she shared her worst dating experience.

According to Praise’s testimony, her guy once took her out for a date to see a movie, on getting to the cinema house they were notified that the price for the movie has increased by a thousand naira.

The poor guy without giving it a second thought immediately told her that he would not be able to pay for the two of them, including buying some popcorn and drinks. Surprising to her, the guy left her stranded and went into the cinema house to see the movie alone.

Her tweet reads; “Got asked out to see a movie,I really don’t know what his budget was but when we got there,the movie price had increased by 1000naira and he said he couldn’t afford to pay for both of us and still buy popcorn n drinks so he left me there and went in to see the movie,”

She added, “I first stood there perplexed, but later paid for myself and went in to see the movie too…After the movie we saw each other again, It was so awkward I ddnt even know what to say, but he was bold, told me he likes girls like me n would make it up to me, ie asking for another date.”

Reacting to her story, some twitter user condemned her for not supporting the poor guy when he opened up on not having enough to pay for them both.

“So to bring out 2k and add is a problem for you smh,” @PlayingWiFire tweeted.

On the contrary, another user identified as @Goodluck_eze1 blamed the guy for taking such an action, leaving outside a lady he took out for a date. He said, “I’m actually curious as to how he felt comfortable, knowing he brought someone and left the person outside.”

Another lady who had similar experience said she was forced to add a thousand naira when the same happened to her as she came prepared for the worst. She said; “Had the same experience but I came prepared…ended up adding 1k to the money. Didn’t see a problem with it tho”

Other reacting to the story tweeted, “Go on dates, but always have enough money on you, if he messed up, you step up!, chikena!!!”

“Whaaaaat? He could have just bought tickets without popcorn (which i believe you’d then offer to pay)or cancel seeing the movie and you guys would just go get a drink or something.”