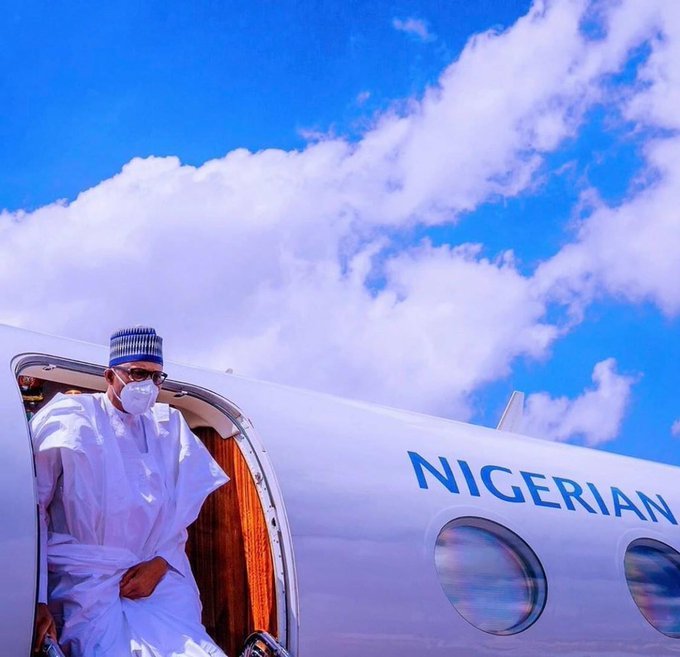 Nigerians have taken to the social media, Twitter, precisely to react to seeing President Muhammadu Buhari wearing the protective face mask for the first time.

Naija News understands that President Buhari has not for once since the outbreak of Coronavirus in the country put on the face mask or protective glass to fight the infectious disease.

However, the President of the Federal Republic of Nigeria with other West African leaders on Thursday arrived in Bamako, the capital of Mali wearing a face mask.

Naija News understands that their mission at the West Africa country was to find an ending solution to the political crisis in the country. The Nigerian President was with the President Alassane Ouattara of Ivory Coast, Macky Sall of Senegal, Mahamadou Issoufou of Niger and Nana Akufo-Addo of Ghana.

Reacting to Buhari’s first appearance on a face mask, some Nigerians under a tweet by Bashir Ahmad, Personal Assistant to the President on New Media made laughable comments.

A Twitter user identified as FORLA tweeted; “So Baba use face mask today”

Another young lady identified as Saadatu while expressing her shock seeing the president for the first time protecting himself from the deadly disease tweeted; “For d very first time baba is wearing face mask”.

See the tweets below;

Meanwhile, the Federal High Court in Abuja on Wednesday upheld the deregistration of two political parties by the Independent National Electoral Commission.

The two political parties deregistered are the Democratic People’s Party and the Reform and Advancement Party.