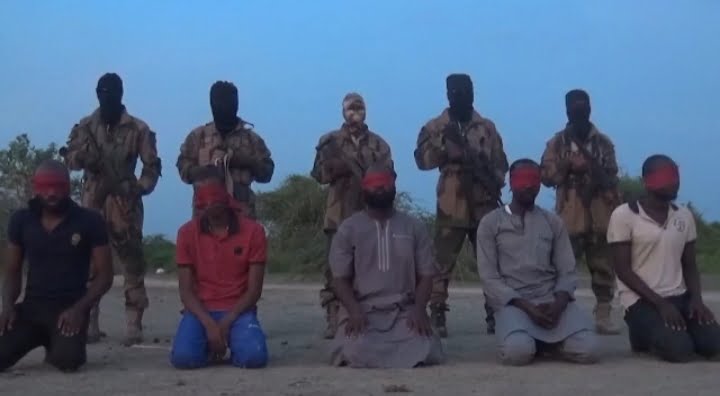 Borno State Governor, Babagana Zulum has expressed his heartfelt over the killing of aid workers by the deadly insurgent group, Boko Haram.

According to the governor, there is a need for critical thinking to end the continuous gruesome killing by insurgents in the state.

Naija News reports that Boko Haram terrorists has killed five humanitarian workers who were recently kidnapped along Monguno area of Borno State. The aid workers were kidnapped since 20th of June 2020 while trying to save IDPs through humanitarian activities and were murdered on 22nd July, Naija News understands.

As heard in the disturbing video during the execution of the humanitarian workers, the insurgents said they executed them because the days given for their ransom had elapsed.

Reacting to the horrible incident, Prof. Zulum in a statement made available to newsmen through his Special Assistant, Malam Isa Gusau said; “Gov. Zulum is deeply pained and extremely worried by the gruesome execution of the aid workers who lost their lives while trying to save IDPs through humanitarian activities.”

The governor described the humanitarian workers as “heroes who were serving humanity.”

He noted that he received the disturbing news of their execution on Wednesday noon “while visiting the Nigeria Security and Civil Defence Corps Headquarters in Abuja to discuss the introduction of the civil-defence volunteer programme and the deployment of more agro rangers to secure farmers in Borno.”

“The Governor mourns these heroes and shares the grief of their families and employers: Borno Emergency Management Agency (SEMA), Action Against Hunger, Reach International, International Rescue Committee, and condoles with the United Nations Office for Coordination of Humanitarian Affairs, (UNOCHA)”, parts of the statement read.

The Borno State governor, however, send a delegation to visit families of the deceased workers to participate in funeral activities and to pay condolence visits to affected humanitarian partners through UNOCHA.

The statement added, “Gov. Zulum wants a new thinking that would hopefully stop these endless killings. We cannot continue to do the same thing over and over and expect a different result.

“The governor believes in a combination of kinetic and non-kinetic approaches and he is of the position that the Nigerian military has, through its operation ‘safe corridor’, demonstrated its willingness to rehabilitate and reintegrate insurgents willing to stop the killings of fellow humans.”