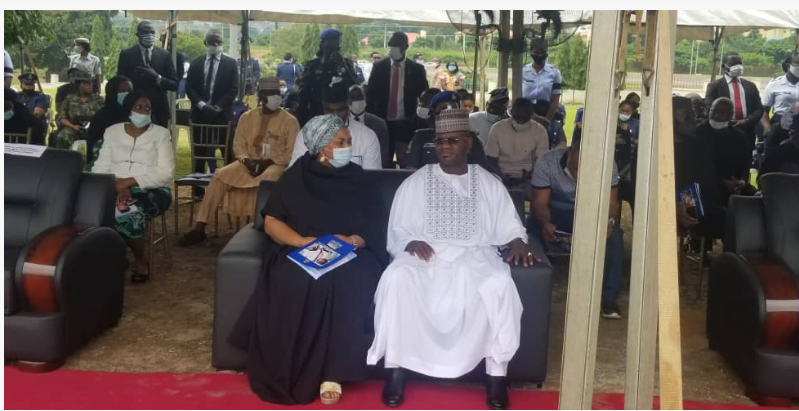 Kogi State Governor, Yahaya Bello, has taken his publicised feud with the Nigeria Centre for Disease Control (NCDC), to the funeral ceremony of Tolulope Arotile.

Naija News understands that while all other dignitaries present at the funeral puts on their face masks, Governor Bello refused to do the same.

The governor who was with his wife at the funeral of Flying Officer, Tolulope Arotile, in Abuja violated the COVID-19 guidelines even while the wife adhered to the rules. The governor had represented Arotile’s home state of Kogi at the event, Naija News understands.

Several photos taken from the event shows the governor exchanging pleasantries with dignitaries without wearing the protective tool against the deadly Coroanvirus pandemic.

This online news platform understands that the governor has constantly noted that the dreaded disease is not in his state, despite provings by federal health officials.

Bello had earlier told residents in the state not to allow fear set in from the pandemic which has brought even developed nations to its knee. He said;  “Do not give in to fear and evil of the issues of COVID-19. It is a disease that has been imported, propagated and forced on the people for no just cause. Nothing kills faster than fear. I urge you all not to accept cut and paste as COVID-19.

Meanwhile, Naija News reported earlier that, a man whose name is revealed as Kehinde Omotosho, has died while in police detention over a crime committed by one of his sons.