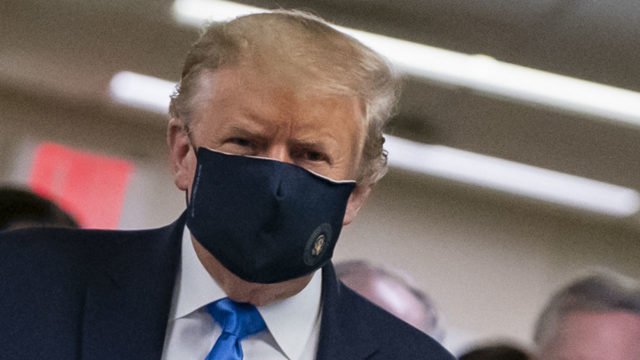 United States president, Donald Trump  finally spoke out in favour of mask-wearing In the North American country as the cases of COVID-19 Rises daily

Naija news Undertands that  Trump returned the daily briefings on COVID-19 as his poll numbers falter.  In another sign of recalibration, Mr Trump belatedly tweeted a photo of himself in a face mask on Monday, calling it an act of patriotism.

We are United in our effort to defeat the Invisible China Virus, and many people say that it is Patriotic to wear a face mask when you can’t socially distance. There is nobody more Patriotic than me, your favorite President! pic.twitter.com/iQOd1whktN

It came after months of resistance to being publicly seen with a face-covering — deemed vital to slowing the spread of the virus — but seen by the president as a sign of weakness.

However, According to the latest figures published by Johns Hopkins University, 14,763,911 cases have been detected worldwide, with 611,322 deaths and 8,338,996 people recovered.