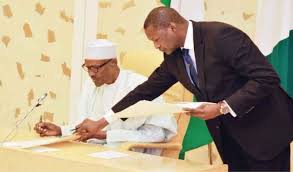 A human rights lawyer, Kabir Akingbolu, has written President Muhammadu Buhari, asking him to dismiss the Attorney-General of the Federation (AGF), Abubakar Malami.

Naija News reports that Barrister Akingbolu who accused Malami of abusing his office advised President Buhari to take the action if his government is serious with the fight against corruption.

The letter of the lawyer to the President is coming after the Attorney-General of the Federation engaged Oladipo Okpeseyi and Temitope Adebayo, two Nigerian lawyers, for the recovery of $321 million Abacha Loot from Switzerland, a job already completed by Enrico Monfrini, a Swiss lawyer who had been on the recovery since 2000.

Barrister Akingbolu in his letter to President Buhari, said AGF Malami turned a deaf ear to the involvement of Monfrini in the recovery despite the outcry over the matter.

His words: “In 2018, despite the fact that various lawyers had worked and completed all the modalities to recovering the Abacha loot; Malami ensured the removal or deduction of 16.4. Million Dollars under the bogus concept of 10% commission for himself through his cronies,” he said.

“Everybody in Nigeria cried as much as the attorney who acted on behalf of Nigeria in respect of the money, but our A.G.F turned a deaf hear and took the money. In 2019, Malami withdrew a 25 billion naira criminal charge against Senator Danjuma Goje without any justification.

“In June 2020, Malami withdrew criminal charges against killer soldiers who were charged along with Wadume, a dreaded kidnapper and an armed robber.

“Continuous act of giving reckless advice to the federal government to disobey court orders, which necessitated the abnormal detention of Omoyele Sowore, El Zakzaky, Sambo Dasuki and a host of others after competent courts have ordered their release which acts he, unfortunately, defended vehemently before the senate when he went for second screening.

“This government will have no justification or excuse if it fails to suspend or dismiss Mr Malami who had expressly admitted and or confessed to the selling of seized crude oil under questionable circumstances when he knew he had no power to do so.

“Thus, if this government decided to keep mum by treating Malami with kid gloves or a sacred cow, the government should forget its anti-corruption war song and stop deceiving Nigerians and the whole world.”

Barrister Akingbolu also said he might file for a mandamus to compel the Inspector-General of Police (IGP), Mohammed Adamu, to perform his statutory duties if the government refuses to probe the AGF, this is even as he had earlier said Malami risks five years in prison for “illegally” approving the auctioning of sea vessels holding crude oil and diesel seized by the federal government.