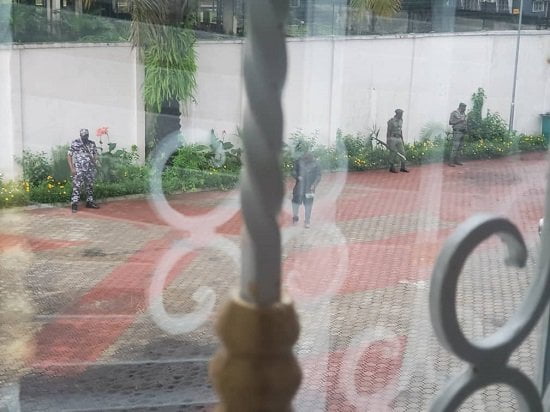 The Rivers State Police Command has defended the invasion of Police operatives at the residence of the former Managing Director of Niger Delta Development Commission, Joy Nunieh, on Thursday.

The state police command condemned the report that the police operatives at the residence were not sanctioned by the Inspector General of Police and the Commissioner of Police in Rivers State.

Recall that Governor Nyesom Wike, while speaking with newsmen shortly after he rescued Nunieh noted that the police operatives could not present a warrant for her arrest neither was the police hierarchy aware of their presence.

The Rivers Police Command while reacting to Wike’s comment in a statement released through Nnamdi Omoni, noted that the police operatives were on legitimate duty.

SP Omoni further stated that the personnel at Nunieh’s residence were from the IGP Monitoring Team in Abuja and were in Port Harcourt on official assignment.

He added that the police operatives before proceeding to Nunieh’s residence observed due protocols and requisite standard operating procedures, including going through the processes of arriving themselves at the Headquarters with their Investigation Activities duly signed and approved by the Commissioner of Police, CP Joseph Mukan.

“The attention of the Rivers State Police Command has been drawn to an Online Publication, credited to Vanguardngr.com, where it was erroneously reported that ‘the MOPOL presence at the residence of Joi Nunieh was not the directive of the Command’.”

“Ordinarily, such a phantom report should have been ignored but due to the potential danger inherent in keeping silent, the Command is minded to react and state the true position as follows: That they went to her (Nunieh’s) residence with Mobile Policemen, suggesting of course that they were there on official duty and not illegal duty as speculated.”

“That, the reference indicating that the Officers were there without the directive of the CP nor the IGP is preposterous and most unfortunate, hence should be discountenanced and disregarded.”