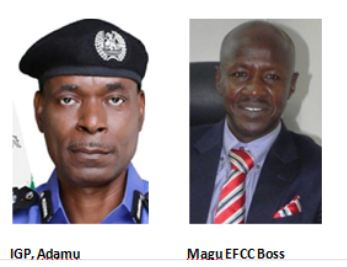 Some special detectives of the state security service held search party at the office of the suspended acting Chairman of the Economic and Financial Crimes Commission (EFCC), Ibrahim Magu

According to a report by The Nation, the detectives also screened and profiled mobile phones of Magu’s close aides. They were all allowed to go home last night.

But Magu, who was present during the siting, which lasted about 12 hours, did not make any appearance before the committee.

However, in a recent development, The Inspector-General of Police, IGP Mohammed Adamu has revealed his stand on the bail request by the suspended Chairman of the Nigeria anti-graft agency, Economic and Financial Crimes Commission, Ibrahim Magu.

Speaking on Monday, July 13 in an interview with newsmen, Public Relations Officer of the Nigeria Police Force (NPF), Frank Mba, said Magu’s probe is been handled by a Federal Government panel and hence the IGP has not such power to grant him freedom.