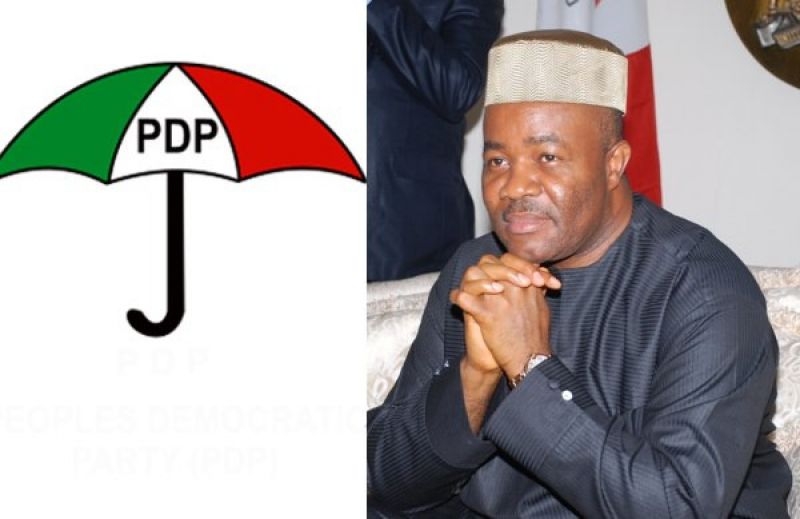 The Peoples Democratic Party (PDP), Nigeria’s main opposition party, says the Minister of the Niger Delta Development Commission (NDDC), Godswill Akpabio must step down and allow an investigation into alleged fraudulent practices at the Commission.

Naija News reports that the PDP made this call in a statement issued on Monday by its spokesman, Kola Ologbondiyan, in reaction to the revelation by the sacked interim Managing Director of the NDDC, Joy Nunieh detailing a slew of corrupt practices by NDDC minister.

This is coming after an investigative hearing into the affairs of the NDDC was conducted by an ad hoc committee set up by the Nigerian Senate, where it was revealed that the Interim Management Committee (IMC) was alleged to have spent N81 billion within three months, allegedly on Akpabio’s directives.

The main opposition party the “monstrous sleaze” so far unearthed in the NDDC was just a tip of the iceberg of the stinking corruption and criminal racketeering that have pervaded the All Progressives Congress (APC) administration.

PDP said in the statement that the shocking details of the allegation by Nunieh of massive stealing, manipulation of budget processes, victimisation as well as alleged fetish practices were mind-blowing, adding that the silence and inaction by the Buhari Presidency and the leadership of the All Progressives Congress (APC) since the uncovering of the fraud in the NDDC signposted complicity at the highest levels.

In the statement, PDP said the revelations tend to validate public stance that treasury looting and cover-up for corrupt persons are normal official statecraft and manifesto of the APC and the Buhari administration.

The statement reads as thus; “Nigerians are still in a state of shock over reports of how the Minister of Niger Delta Affairs, Akpabio, allegedly bullied officials to pillage the Commission’s foreign currency account; how the laid down procedures of the Federal Executive Council (FEC) are allegedly circumvented to siphon unapproved budgets as well as how innocent workers and federal legislators, who are averse to corrupt practices, were victimised, implicated and even harassed with fetish practices.

“The allegation by the former NDDC MD that a certain NDDC top notch said he can kill if Senator Akpabio asks him to do so, shows the level of recklessness and the victimisation in MDAs under the APC rule.

“More distressing is that the Buhari Presidency and the APC had remained silent even when the embattled minister has not provided any concrete defence to the allegations beyond personal attacks on the whistleblower.

“Nigerians will recall that our party had in April, alerted of massive looting in the NDDC and called for investigation, which was however not addressed by the government.

“Our party had also alerted that the NDDC management has not been able to give cogent explanation to the reported Lassa fever contract fraud through which over N4 billion naira NDDC fund was alleged to have been frittered on hazy procurement deals.

“This is in addition to alleged N5.5 billion COVID-19 scandal which trails reports that the NDDC had already spent over N1.045 billion purportedly for supply of kits and palliatives to Nigerians in nine states.

“The PDP holds that any credible administration like the one the APC and the Buhari Presidency would want Nigerians to believe as running, would have spoken out and commenced immediate investigation into the matter if its officials are not complicit”.

The opposition party called on the Presidency to speak out on the issue, particularly, given the delicate nature of the Niger Delta, and take steps to investigate and prosecute all those involved in the alleged fraud, adding that Senator Akpabio should step aside and submit himself for investigation over the weighty allegations.