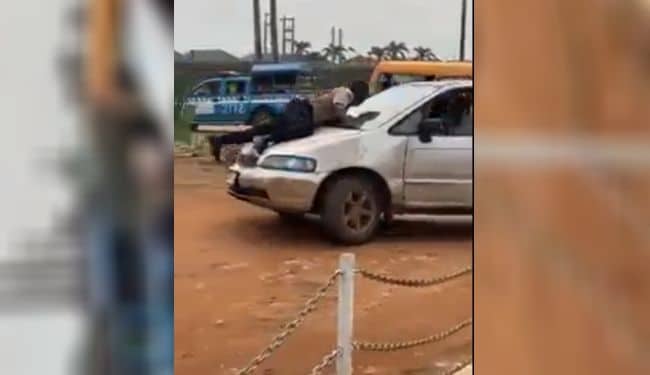 The Federal Road Safety Corps (FRSC) has reacted to the viral video showing one of its officials hanging dangerously to the bonnet of a moving vehicle.

According to information gathered by Naija News, the incident occurred on Monday, July 6, 2020 along Ikorodu-Sagamu road.

The driver of the vehicle (Honday Odessey) was attempting to avoid arrest having been accosted by a team of FRSC officials for the offence of seat belt violation and other offences.

The officers were on a special joint patrol to enforce the Presidential Task Force directives on physical distancing and overloading amongst passengers to curb further spread of the coronavirus when the incident occurred.

Ikorodu driver and FRSC officer🤣🤣🤣
This cruise of a country wey we dey ehn😂 pic.twitter.com/AMNM7Cpf9z

Reacting to the development, the Corps Marshal, in a statement made available to newsmen on Wednesday by Bisi Kazeem, Corps Public Education Officer, said the entire team of FRSC officials involved in the incident have been summoned for appropriate disciplinary actions.

The statement noted that the officials failed to operate within safety and professional guidelines.

“The Corps Marshal is deeply saddened by the development and has ordered the entire team to be recalled to Lagos State Sector Command for investigation and appropriate disciplinary actions in line with the Corps’ regulations; while the erring driver faces immediate prosecution in a court of competent jurisdiction.”

“It is expedient to state that the Corps’ operational guidelines do not allow personnel to stand in front of any vehicle to effect arrest at the detriment of their own safety while stopping the vehicle. For emphasis, a staff does not need to commit suicide while stopping an offender that is already on a suicide mission, because every arrest of an offender is expected to be done within safe and professional limits in line with their training and operational guidelines and not to unnecessarily put their own lives in danger while attempting to arrest a fleeing offender.”

“That is why the Corps has been deploying technology to track all cases of absconding recalcitrant drivers of this nature and bring them to justice.”

It, however, warned motorists against disobeying traffic laws and law enforcement officers, adding that the vehicle driver who absconded after the incident will be smoked out and made to face the full wrath of the law.

“Motorists are warned to note that the above scenario is not a guarantee for drivers to continue to disobey traffic laws and exhibit such dastardly acts that put the lives of law enforcement agents at risk. Consequently , the Corps will utilize every legal option within its powers to arrest and prosecute the absconding dangerous driver who having realised his folly, abandoned the vehicle and took to his heels.”