Naija News reports that President Buhari on Thursday called for the dissolution of the National Working Committee of the APC.

The President’s recommendation was approved by the party’s NEC and a caretaker NWC recommended to take over in the interim.

Following the NEC approval, Governor of Yobe State, Mai Mala Buni was appointed as the Chairman Caretaker/Extraordinary Convention Committee of the party. Other members include the Governors of Niger and Osun.

The NEC also ratified all decisions taken in respect of the Edo Guber Primaries, which means Osagie Ize-Iyamu can now be recognized by the Independent National Electoral Commission (INEC) as the authentic candidate of the APC in the September 19, 2020, governorship election in Edo State.

As part of resolutions, the APC NEC also said all pending court cases against the party and its members have been suspended.

But reacting in a statement on Thursday evening, the dissolved APC NWC maintained its earlier position that Chief Victor Giadom, a former National Secretary of the party, has no authority to convene a National Executive Committee meeting.

The statement reads: “Article 25(B) of the Constitution of the APC is explicit that only the National Chairman or the National Working Committee (NWC) is given the prerogative of summoning meetings of the National Executive Committee (NEC) of the Party either for statutory quarterly meetings or for emergency meetings. The same provision of the constitution makes it compulsory for a notice of minimum of 14 days in respect statutory quarterly meetings and 7 days in respect of emergency meetings

“We note that Chief Victor Giadom had convened and conducted a virtual meeting purportedly to be a National Executive Committee (NEC) meeting of our Party wherein certain far-reaching resolutions were purportedly reached. While the National Working Committee is studying the unfolding drama, it will be consulting with stakeholders and team of lawyers on the next line of action”. 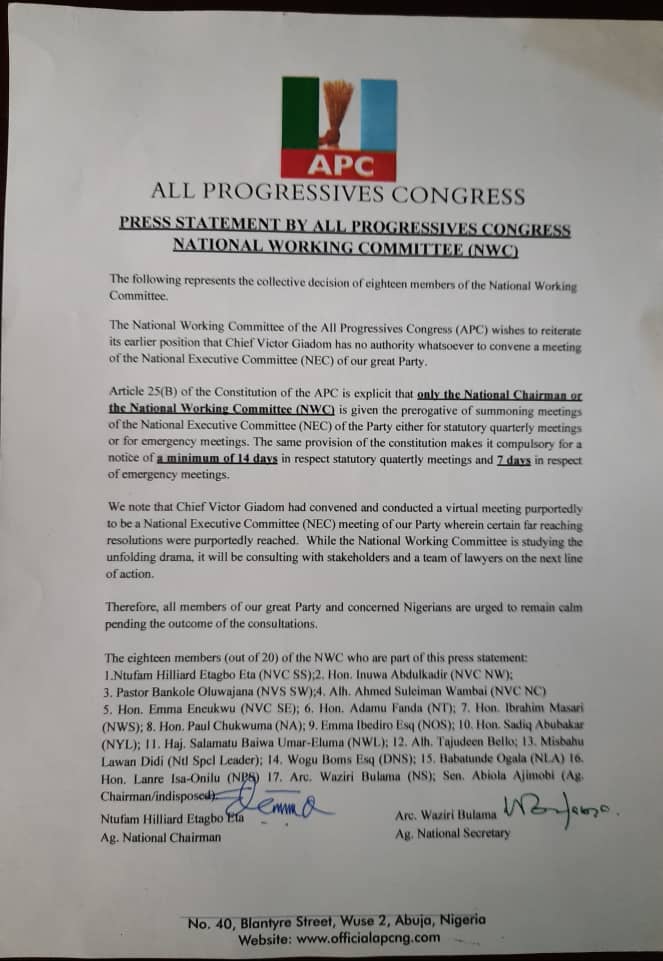