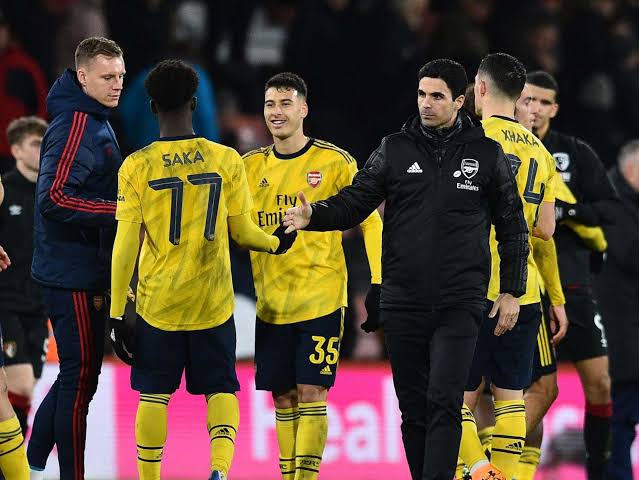 The four players who have agreed to new deals as confirmed by the Gunners on Wednesday are David Luiz, Pablo Mari, Cedric Soares, and Dani Ceballos.

Though the club noted that more details of the deal agreed will be unveiled later, the immediate information available shows that Luiz got a one-year deal extension, Pablo Mari signed a long-term deal, Cedric also signed a long term deal while the loan deal that brought Dani Ceballos from Real Madrid was also extended.

More info on the new deals ?

Following the announcement, some fans have taken to the micro-blogging site, Twitter to express their views. Many are of the opinion that the club is yet to reach new deal agreements with key players such as Captain Aubameyang and winger Saka.

Others are of the belief that if Arsenal continues on the current trajectory, the club might even be relegated to the Championships.

See some of the reactions:

You even make Luiz the first person on the announcement.. Yall are fucking up this club to the end. It’s a Titanic Sink FC ????? pic.twitter.com/LdUWeRSLy6

what about Aubameyang and Saka?

We are a joke. Embarrassing.

Cedric is 29 this summer, hasn’t played a game for Arsenal in six months on loan (£1m loan fee), and has signed a four-year contract. Someone’s getting paid; and someone’s getting taken for a ride. Which is which: TBC.https://t.co/RZUJIPmiVR

I swear this club is deliberately tryna kill me https://t.co/FuZcV2mq4q

It’s my fault that I have chose to support this club but RENEWAL OF LUIZ’S CONTRACT man that is pure disrespect, untill Kroenke sells I’m not buying any Arsenal shirt and that’s really it

It’s my fault that I have chose to support this club but RENEWAL OF LUIZ’S CONTRACT man that is pure disrespect, untill Kroenke sells I’m not buying any Arsenal shirt and that’s really it

We are heading towards becoming the next Leeds or Sunderland

The @DavidLuiz_4 deal is still what I don’t understand….he’s cost us too many points this season for him to even get a 2 weeks extension

Meanwhile, Arsenal have lost their first two games after matches returned in the premier league following the coronavirus break. First, the Gunners lost 3-0 to Manchester City and then lost 2-1 to Brighton.

The next game for Arsenal is another away game against Southampton on Thursday.