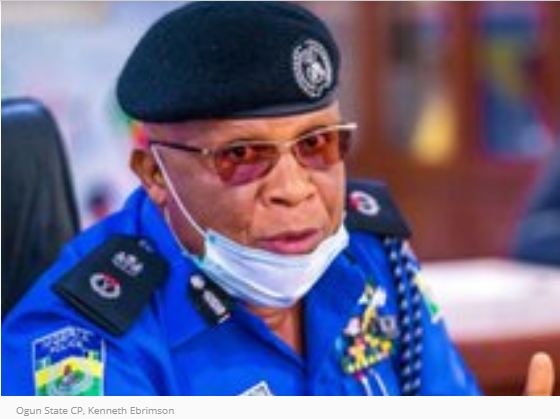 The Commissioner of Police in Ogun State, Kenneth Ebrimson, says the recruitment of special constables in the state will commence this week.

Naija News reports that the Ogun CP made this known on Wednesday after the inauguration of the new state chairman of the Police Community Relations Committee, Samson Popoola.

The Commissioner said the recruitment which is aimed at fighting crimes at the grassroots, is part of efforts to encourage community policing in the state.

Ebrimson who said the recruitment would commence shortly after arrangements have been finalised at the Area Command, Local Government Areas and the divisional levels, this week, noted that the constables would be trained on police operation and would be given police uniform, although without badge.

The Ogun CP said the constables would assist the command to prevent criminal activities, gives the command intelligence report and resolve crisis among members of the public.

His words: “All other strata of the community policing, the Area Command, the Local Government Area and the divisional level will be concluded without any doubt this week.

“Thereafter we will now start with a pilot scheme of the recruitment of the constabulary who will now form the bulk of the community policing practitioners at the community level to assist the police in prevention, information and intelligence gathering and conflict resolution.

“So, in no distance time when all these level of advisory committee of the community policing has finalised we will now see the next level will now be the consolidation of the recruitment of the constabulary and sending them to a modicum training of the police operation which will translate to bringing them in as part of our partners and remember also part of the concept.

Speaking further, Ebrimson lauded the PCRC’s contributions and support towards fighting crime in the state and urged members of the PCRC to further corporate with the police command to make the state free of criminal activities.

Responding, the new chairman of PCRC pledged that his administration would transform the community policing in the state.