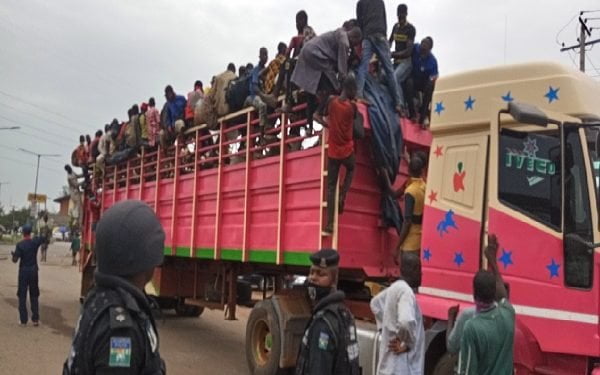 Men of the Nigeria Police has reportedly intercepted trucks loaded with cows and youths from the north at the Kara end of the Lagos-Ibadan Expressway.

According to the report, the trucks heading to Lagos State were caught filled with loads of cows and humans in the same container.

The development was confirmed to newsmen on Tuesday, June 23 by the Chief Security Officer of the Hausa community, Kara-Ibafo, Goroma. He revealed that the Arewa youths were “going to their houses” when they were arrested by the policemen.

However, when contacted, the Divisional Police Officer of Kara said she is yet to be briefed of the arrest.

Meanwhile, Naija News reported earlier that Yobe State Command of the Nigeria Police Force (NPF) has reportedly apprehended a wood seller in the state for allegedly luring a 10-year-old girl to his room and raped her.

According to reports, the 80-year-old man had made several attempts to get down with the young girl who is reportedly an orphan, but all proved abortive until his last move.