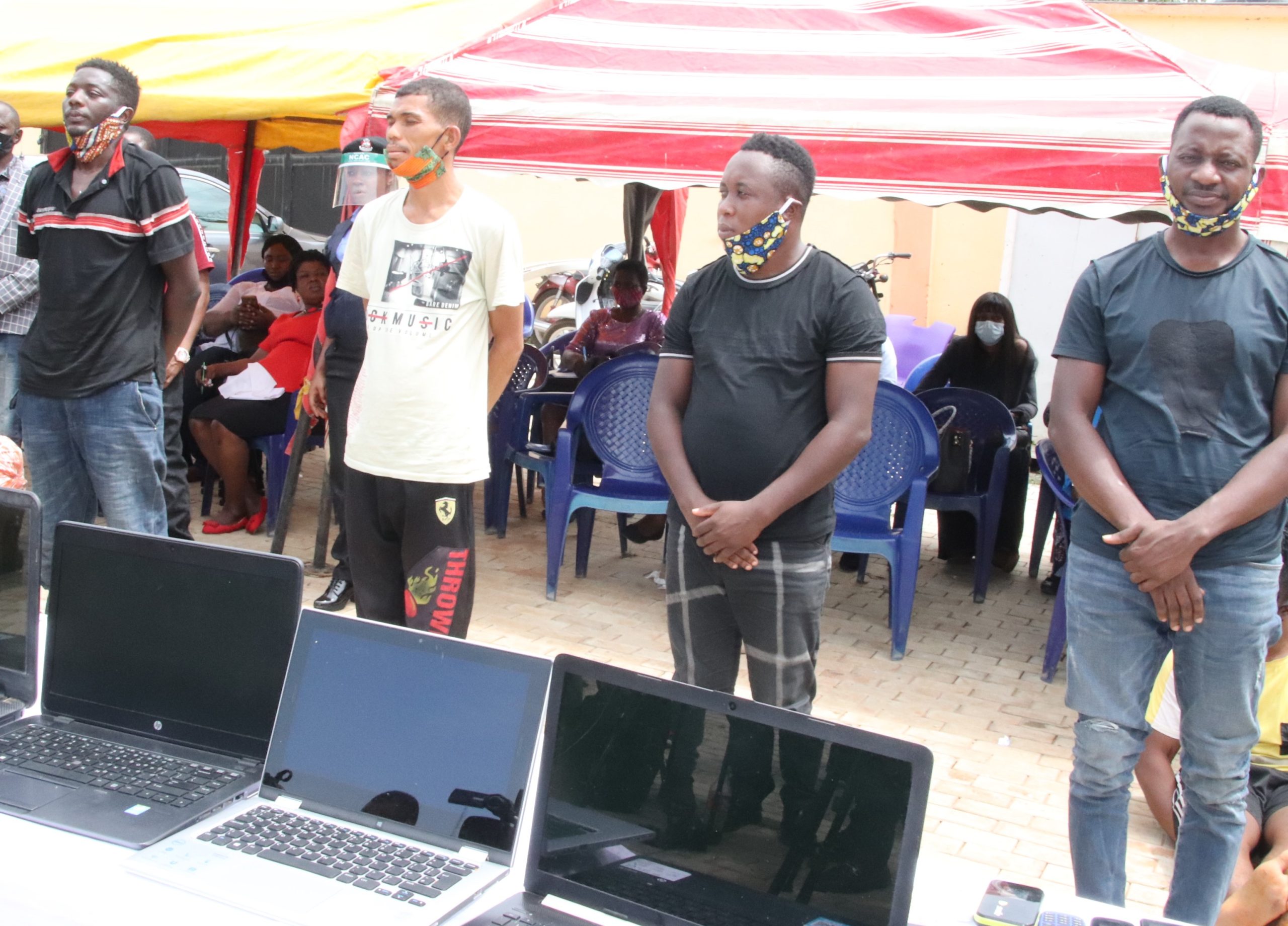 Operatives of the Nigeria Police Force have arrested twenty-four (24) suspects comprising twenty-three (23) male and one (1) female for cybercrime and other related offences.

The suspects were arrested for their involvement and indictment in cases of romance and online dating scams, generating and deployment of fake bank alerts, hacking and fraudulent wire transfers, cyberstalking, and impersonation of high-profile personalities in Nigeria and across the world.

Exhibits recovered from the suspects include:

vii. Quantities of dry leaves suspected to be Marijuana

Notable amongst the cases is the arrest of three brothers – Emmanuel Ushie – 23yrs; Henry Ushie – 30 years old and a graduate of Statistics from Anambra State University and Matthew Ushie – 28 years old and an OND graduate from Federal Polytechnic Oko, for running a fake Frank Mba Foundation bank account with FCMB.

According to information made available to Naija News in a statement on Monday by Force Public Relations Officer, Frank Mba, the trio used a fake Facebook account and the fraudulently operated bank account to defraud innocent Nigerians of their hard earned monies under the pretext that the Foundation is raising money to help vulnerable Nigerians during the Covid-19 pandemic.

Investigations by the police operatives attached to the Intelligence Response Team (IRT) reveal that the brothers engage extensively and serially in such frauds and other related cybercrimes.

During the unrelenting manhunt of the fraudsters, Henry Ushie ‘m’ 30yrs, an elder sibling to Emmanuel Ushie, was identified as the gang leader of the syndicate behind the scam. He went underground as his younger siblings also involved in the crime were arrested.

Following weeks of intense follow-up and meticulous investigations, the kingpin – Henry Ushie ‘m’ was arrested on Thursday 11/6/2020 at about 1255hrs at a hideout in Ihiala, Anambra State. His arrest eventually led to the arrest of his younger brother Mathew Ushie ‘m’ who is also an active member of the syndicate.

Further investigation reveals that Mathew Ushie ‘m’ had been arrested in Ghana last year in a well-publicized bust of fraudsters where he and other international fraudsters used the name of the Inspector General of Police of Ghana, John Kudalor to defraud unsuspecting Ghanaian policemen in the guise of providing an opportunity for them to attend United Nations peacekeeping mission using a fake Facebook account.

Information about his arrest and parading before the press in Ghana is available on the internet.

Similarly, Henry Ushie had also been arrested in 2017 by the IRT for impersonating then ACP Abba Kyari, the Commander IRT on Facebook and defrauding many innocent Nigerians before he was arrested and subsequently charged to Court for impersonation. He eventually got bail from the court and went back to same crime.

All the suspects will be charged to court at the conclusion of investigations.

Meanwhile, the Inspector-General of Police, IGP Abubakar Adamu once again uses this medium to assure Nigerians of the continued resolve of the Force to rid the country of all forms of crimes and criminality including cybercrimes.

He also urges citizens to redirect their energy to the positive utilization of the cyberspace, cyber resources, and the social media, and shun their related negative influences.