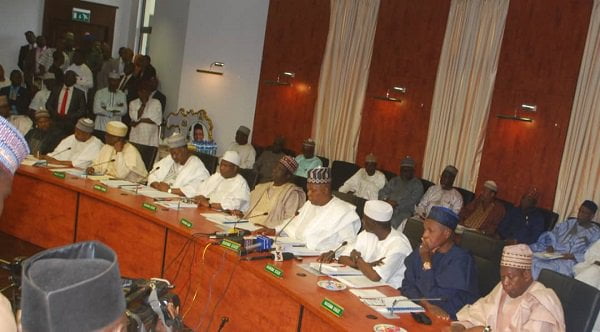 Northern governors on Monday, June 22 held a meeting in Abuja over security challenges faced in the region.

Details of the closed-door meeting held between the nineteen state governors, security agencies and Prof. Ibrahim Gambari, Chief of Staff to President Muhammadu Buhari was disclosed to newsmen by Zamfara State Governor, Bello Muhammad Matawalle, moments after the meeting.

Naija News learnt that the meeting which was targetted at addressing insecurity in the region was held at the office of the National Security Adviser, NSA, Major General Babagana Monguno (retired) in Abuja.

According to Matawalle, they were able to come up with modalities to kick out banditry and other criminal activities in the region, adding that those who have repented of the evil acts have been reintegrated, while those who failed to give in to the security agencies are facing the full wrath of the law.

“I am here to see the Chief of Staff because of the issue of security that is bedevilling Zamfara State. We have discussed extensively the issue of insecurity in Northern Nigeria not just Zamfara State,” said Matawalle when confronted by news correspondent at the Aso Rock Villa.

He added, “Today (Monday), we met in the National Security Adviser’s office with Northern Governors and the Inspector General of Police and other security agencies.

“We discussed seriously on the issue of insecurity and the Chief of Staff invited me today to come and brief him about insecurity in my state which I did. We have discussed about it and understand where we are going. Zamfara State government and the security are doing their best to ensure we contain insecurity.”

The governor noted that security agencies attached to the region are doing their best to bring calmness to areas most affected by the insurgent.

“It is very successful. Security agencies are doing very well and they have been working for about one month and we have seen the results, they have recorded a lot of successes in their operations,” He said.

“You know these operations are ongoing and they have the support of everything they need from the state and we assure Nigerians that within some few days they will make tremendous achievements.”

Matawalle reiterated, ”We have to adapt so many ways to tackle the insecurity. We use stick and carrot and it is going concurrently. There are some repentant bandits that have already subscribed to the peace initiative, we are using them and some that have refused to dialogue, we are fighting them, so we are using both.”

Meanwhile, a former senator in the 8th National Assembly, Shehu Sani, has warned the Nigerian government to avoid parleying with bandits, noting that they operate without regards for any government or law.