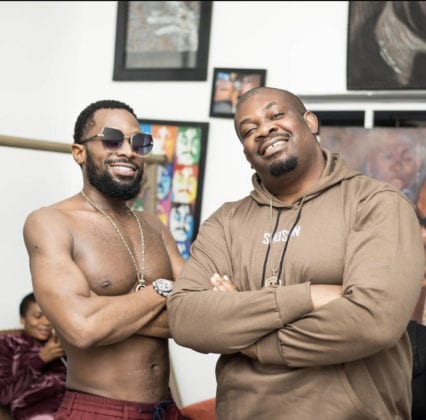 Naija News had reported earlier that a talent manager and model scouts, Otunba Benjamin Ese had accused Dbanj of allegedly raping his friend (Miss Seyitan Eunice Babatayo) in 2018. The talent manager made the allegation after Dbanj showed support by calling for justice for rape victims via his Instagram page.

The talent manager who asked the singer to take down the post tagged him a rapist and took to his Instagram page to narrate how DBanj allegedly raped his friend at a hotel in Lagos.

Ese wrote: “How you have the courage to post about rape is what baffles me. Quick story time—On the 30th of December 2018 at Eko Atlantic an event called splash off which was an all-white party, franklin your manager then invited my friend to the party, on getting there Dbanj sighted her and sent few people to talk to her but she refused.

“My friend left the party and went to glee hotel in Vi where she was lodged by her friend franklin cos my friend couldn’t go back to the mainland that day. My friend got a call from Oyinda who at that time was dating Dbanj’s friend, telling my friend the amount of money Dbanj was ready to spend on her if he agrees, but my friend turned down the offer because she wasn’t interested.

“Dbanj drove all the way from Eko hotel where he was lodged and came down to glee hotel in Victoria island at midnight 2:40 am and collected the spare key from the receptionist, obviously it’s Bbanj a fucking celebrity rapist, he would be given a spare key, got into my friend’s room and forcefully threatened he would walk her out of the room naked, Kept his fingers in her Vagina and repeatedly raped her.

“My friend was crying and Dbanj turned deaf ears how wicked and heartless!!! And immediately he did that Dbanj left. So you still have the right to post on Rape it’s been two years my friend has been traumatized over this. And as at yesterday, she threatened to commit suicide, she’s so livid and mad seeing a rapist like you post this.

Displeased with the accusation days after, Dbanj asked Miss Seyitan Babatayo who accused him of raping her in a hotel room on December 30, 2018, to make a payment of N100m within 48 hours or face legal action.

In a pre-litigation letter signed by his lawyer, Chief Mike Ozekhome (SAN) and addressed to Miss Babatayo’s lawyer, Ojoge, Omileye and Partners, dated June 15, 2020, D’banj also demanded that an apology be published in at least four national dailies.

“We have been instructed to demand and we so hereby demand from you the following: That your client makes an outright apology and a total retraction of each and every false allegation made against and concerning our client,” the letter read in part.

With the rape saga setting social media ablaze, Don Jazzy, who was Dbanj’s partner from the days of Mo’Hits, has taken to the micro-blogging site, Twitter to give his opinion on the matter, saying he is sure the truth would always prevail and that the law would always protect the victim.

His words: “No matter how long a lie lasts, the truth will always prevail. The fact is that one of them is a victim and the law will protect that person. I stand firmly against rape and all injustices against women, children and everyone including oppression. I urge all victims to speak out and report to the appropriate quarters.

“It is also important that every accused person is given an opportunity to set the facts straight. For most of us, all we have is the good name our parents have given us and we must protect and bequeath to our own successors.

“This particular case saddens my soul but I am not competent to investigate or judge this matter. I implore the police to thoroughly investigate and courts to do justice.”

No matter how long a lie lasts, the truth will always prevail. The fact is that one of them is a victim and the law will protect that person. I stand firmly against rape and all injustices against women, children and everyone including oppression. I urge all victims to speak out