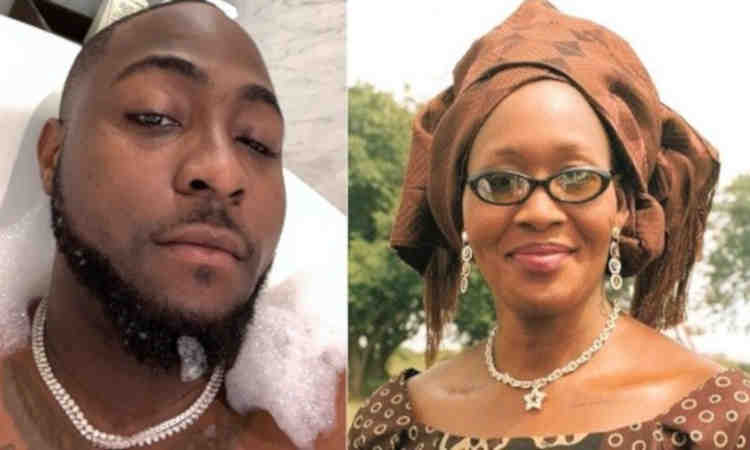 Nigerians again have tagged controversial journalist, Kemi Olunloyo with series of names after she took to her Twitter page on Wednesday to pray for renowned Nigerian singer, Davido and his fiancee, Chioma.

Over the weeks, the investigative journalist has dragged the Adeleke’s family on her social media accounts, leaked out alleged secrets between the singer and his baby mama, Naija News understands.

Olunloyo in one of her recent posts alleged that Davido’s fiancees have moved out of his house as a result of his recent cheating scandal.

The journalist reported also that Davido has welcomed another baby boy with a London based Makeup Artist, and she also went ahead to share a photo of the lady and called her Davido’s wife on social media.

The new baby mama identified as an Angola born London based makeup artist, Larissa Yasmin Lorenco was said to have been in the singer’s life since the year 2017 despite his relationship with Chioma Rowland, Naija News reports.

She wrote, “God Bless Davido and Chioma. May your relationship be SEALED with a wedding soon. May your Marriage be blessed…so help you God! Chioma my lover will change to Chioma my wifey.”

God Bless Davido and Chioma. May your relationship be SEALED with a wedding soon. May your Marriage be blessed…so help you God! Chioma my lover will change to Chioma my wifey🙏🏾💍👰🏽🤵🏾💒#Kemitalks #drkemiolunloyo pic.twitter.com/50H5ztYAnY

A reaction, however, followed Olunloyo’s tweet as some Nigerians on the social media conclude that she has been paid. The netizens noted that the journalist is inconsistent in taking sides, adding that her moves proved she has been settled behind the scenes.

“They have settled her,” said @RaysRisha.
Reacting in the same vein, another user identified as @aydotinga said, “Kemi is a confused human being.”

Defending the claims that Davido has settled Olunloyo to make peace with his family, some noted that the singer can not do such, adding that the journalist does her things for clout chasing.

“You are insane.. Davido will never settle her.. Face with tears of joy she’s doing everything for clout chase,” said  @OkoroTeg while responding to @RaysRisha’s tweet.

He added, “Kemi Olunloyo who try to defame a man of God but her plan fail and was sent to prison. Face with tears of joy an ex-convict.”

Others, however, were still confused as they could not believe that the prayer directed to Davido and his fiancee was coming from Olunloyo.

“Has ur phone been stolen or ur acct hacked? This is so unlike you, saying something nice,” said @C_Oranye

Another user, @damilare_ti who recalled Olunloyo’s previous claim about Chioma leaving his apartment said, “But mummy you said Chioma left the other Night and you spot her at a Bus station, did she Miss the BUS?”

Mother Beats Her 7-Year-Old Child To Death In Delta