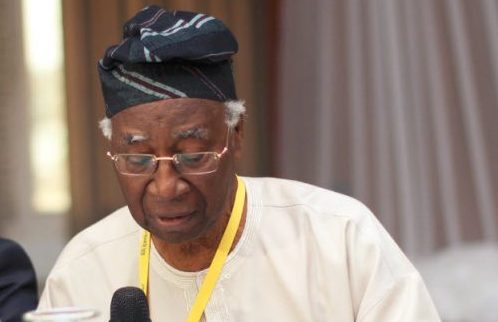 The death of Prof. Oladipo Akinkugbe has been described as a great loss to the nation’s academic community by the Vice-Chancellor University of Ilorin, Prof. Sulyman Age Abdulkareem,

However, In a condolence message issued by the institution’s Director of Corporate Affairs, Mr Kunle Akogun and made available to Naija News, the Vice-Chancellor said that the Emeritus Professor laid a solid foundation for the University of Ilorin, which other vice-chancellors after him built on.

Abdulkareem also described the late Prof. Akinkugbe as one of the most accomplished administrators that Nigeria has ever produced.

” Definitely, the pre-eminent status of our University today, could be rightly traced to the great foundational works done by the late Prof. Akinkugbe”.Pointing out that the late Prof. Akinkugbe left a great mark in the nation’s university system where he spent most of his career life, the Vice-Chancellor described him as an astute administrator, a medical colossus, a consummate academic, a consistent advocate of better healthcare delivery system in the country, a mentor par excellence and a role model of no mean stature”.

The Vice-Chancellor added that the tireless and selfless pioneering efforts of the deceased, which included securing a very serene environment and a comfortably large expanse of land for the limitless growth of the University was not only a clear testimony to his foresight but also an achievement that would forever be celebrated even by generations yet unborn.

While praying Almighty God to grant Prof. Akinkugbe’s soul peaceful repose, the Vice-Chancellor also prayed God to grant the family he left behind and the nation’s academic
community the fortitude to bear the great loss.