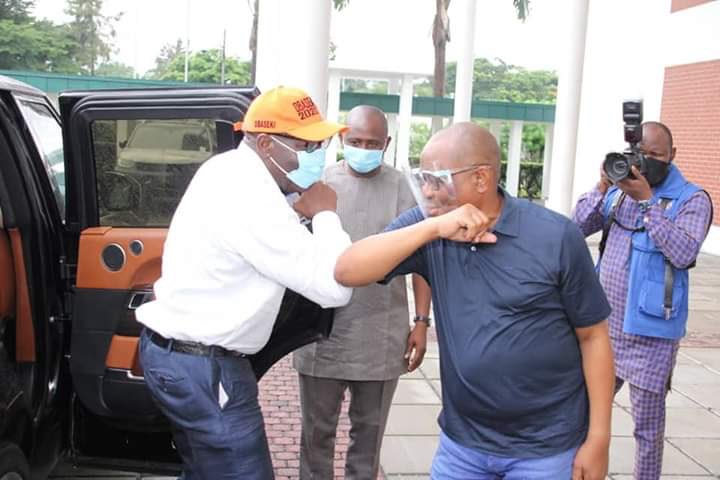 A storm of reactions by Nigerians has greeted Governor Godwin Obaseki’s visit to Nyesom Wike, the governor of Rivers State, south-south Nigeria.

Naija News understands that several reports on Friday evening alleged that that Governor Obaseki has dumped the ruling All Progressives Congress (APC) after he was disqualified by the screening committee and had since joined the opposition PDP, with the hope of flying the party’s flag for the Edo 2020 election.

Although Obaseki is yet to issue a statement regarding his alleged defection to the PDP and the plan to run for a second term in office on the platform of the main opposition party in the state, the Edo governor, however, visited Wike, a PDP governor on Sunday in Port Harcourt, thereby fueling rumours of his move to the opposition party.

Despite the fact that details of the meeting are yet unknown, as it was held behind closed doors, it seems like the beginning of the political rebranding regarding the hope of Obaseki ahead of the Edo Guber.

Moments after the meeting, Nigerians took to the micro-blogging site, Twitter, to react to the PDP and APC governor meeting.

The next 48 hours would be interesting. pic.twitter.com/Q6w0kFQoM5

I no longer understand the game.@JackObinyan I no understand again o. pic.twitter.com/NfxY5qGv5h

Wike might decide to intervene in this Edo issue. And I know Wike well. If he decides to carry matter on his head, he carries it to the last.

Edo go hot be that!

Almost confirmed: Obaseki set to join PDP as he visits Gov Wike. Seems someone is listening on how to defeat a stubborn godfather. pic.twitter.com/yYSp5TcBod

Wike to Obaseki ; Have you listened to my complete album, titled, Wike dae come?

Obaseki; Where I fit buy am?

Wike ; Na me sing am pic.twitter.com/ugqbcqswyi

Mr Governor Fighting Covid-19 in Wike’s Rivers. By the time he finishes, he will have acquired Godfathers, Godmothers, great Godfathers, even great Godmothers and it will be nothing like the free support he received in APC. If he doesn’t know, PDP is share the money ??? pic.twitter.com/XwmSiCNdbC

Obaseki’s visit to Wike is mainly for optics.
At the same time to send message to the crooked godfathers.
You don’t expect him to give up the fight fr.

You people should stopeet nah, what is wrong in two Governors (Wike & Obaseki) sharing notes, that you have started insinuating 1 + 1… haba is Edo not Rivers’ brother again?

Anyways, you may need to tell Oshiomhole to start taking lectures from Amaechi asap, it may be needed. pic.twitter.com/UlCstAunpD