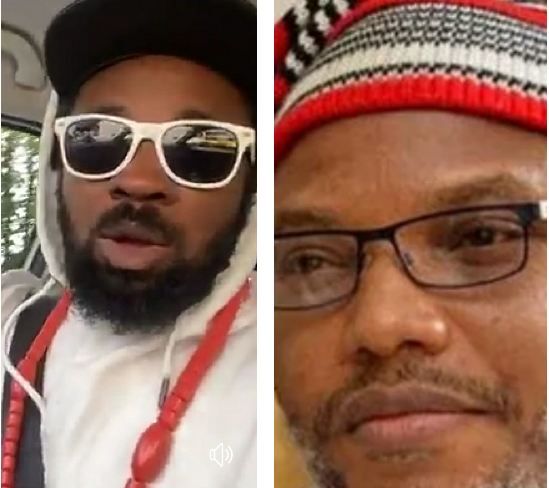 The Indigenous People of Biafra (IPOB), Nnamdi Kanu, has attacked an Igbo son based in Austria, Eze Awo, over alleged donations received by the IPOB.

Naija News reports the rift between Nnamdi Kanu started when the IPOB leader said on Radio Biafra where he declared that any Igbo person in the United States of America ( USA) who doesn’t pay $1 will not be allowed into Biafra land when the Biafra Republic is achieved.

However, questioning Kanu’s statement, Eze Awo accused the IPOB leader of embezzling the funds allegedly received by the pro-Biafra group from individuals believed to be in support of Biafra struggle championed by Kanu.

Apparently displeased with the statement, furious Kanu said: “Every idiot, you see a lunatic, they cut his dreadlock in the village, you see with phone typing nonsense. One day, I will get him, then he will tell us how, where, when we embezzled money.”

Reacting, Ezo Awo played the video and said: “He has captured the part of the video where Nnamdi Kanu said he would get him and said he would forward the video to the police and post it for the whole world to see.”

Eze Awo posted the video on Facebook and captioned it: “So my truth makes Nnamdi say he will look and get me soon, why are u after my life? S as m a fearless king, u can not do me any thing! Believe u me, Njaba is at work soon u will know why they called me Eze password all de police here in Austria have this video for my sake.”👂🏾 [sic]