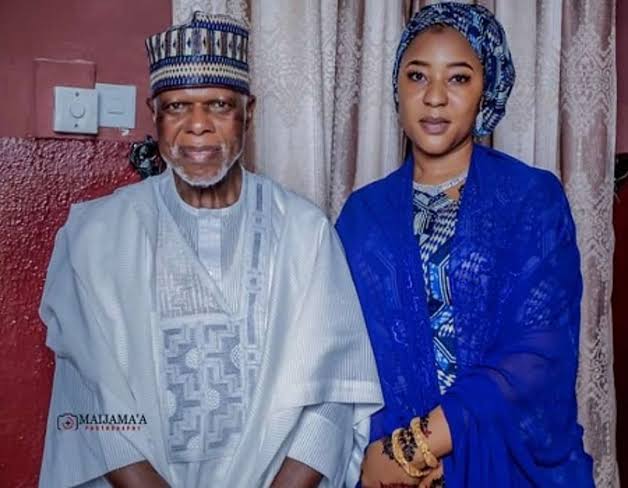 His wedding had held on saturday to Yahaya, two years after his first wife, Hadiza Jummai died.

Meanwhile, his new wife’s ex lover, has threatened legal action if he’s not refunded the sum of N9,081,207.45 spent on her over the course of their relationship.

Today, a court document addressed to the new bride by Zubairu Malamai, a man who claimed to be Yahaya’s fiancee before she tied the knot with Ali, accused her of a breach of trust in their relationship.

In the document which was dated May 22, Malamai said he had invested the stated amount in Yahaya’s business and life, thinking that they would be married b4 she cut ties with him.

Malamai said she promised to marry him, only for her to marry someone else after an “unnecessary quarrel” over money.

“Our brief as disclosed to us is that for over three years you have been in a relationship with our client where he has invested so much in your life, future, and business when you consistently promised to marry him,” Malamai’s claim, which was filed through his lawyer, read in part.

“Even though you knew you were deceiving our client, you allowed hum for all these years to spend money and resources on you while he was in the belief that he was doing that to his future wife. Be that as it may, we have our client’s brief that you have decided to pick another man as a husband.

“While our client congratulates you in your new home, we have instructions to also disclose his displeasure over your reaction few days before your new marriage by taking an unnecessary fight with him thereby insulting him and calling him all kind of names and your claims that he calculates all you have collected from him both as loans, investments, and trips ticket so you can pay him.

“In view of the above, we have our clients’ instructions to demand from you and we hereby demand from you the immediate payment of the sum of N9,081,207.45 only. Failure to heed the same shall leave us with no other option than to proceed with legal action to recover the said sum.”

Among the items to which the said sum was attributed to are N2.7 million allegedly spent on flight tickets, N1.5 million investment loan, N450,000 spent on clothing and business, and N500,000 for car purchase.

Others are N753,000 spent on “LEFE cloths,” the cost of company laptops, car plate numbers, company ID cards, a pair of shoes and uniforms, and payment of N200,000 made on proxy.

“In view of the above, we have our client’s instructions to demand from you the immediate payment of the sum of N9,081,207 only,” it added.

“Failure to heed to same shall leave us with no other option than to proceed with legal action to recover the said sum. Your choice in this matter is our preference.”

Related Topics:Hameed Ali
Up Next