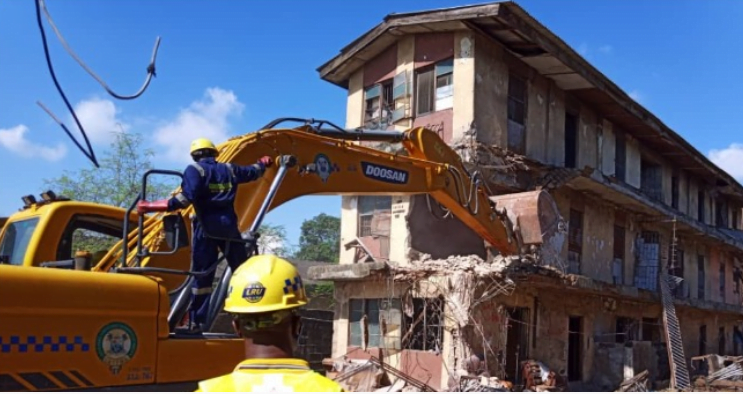 The Governor Babajide Sanwo-Olu led government of Lagos State has pulled down a reportedly cracked two-storey building in the Surulere area of the state.

It was reported that the demolished structure had shown some visible cracks among other defects which led to the action taken by the Lagos State Emergency Management Agency.

According to the agency, the structure has failed several “integrity tests” and hence the need for the demolition in other to ensure safety of lives of residents.

Speaking on the development, the Director-General of the LASEMA, Olufemi Oke-Osanyintolu, noted that residents of the apartment were duly taken out before the agency embarked on pulling down the structure last Monday.

“The occupants of the building have been evacuated by the Agency’s officials. The building has subsequently failed the integrity testing and is undergoing a controlled demolition with LASEMA heavy-duty equipment, with a go-ahead from the Honorable Commissioner, Ministry of Physical Planning.”

Olufemi, however, challenged house owners in the state to ensure necessary corrective measures are taken on their properties to safeguard lives from avoidable tragedies.

Meanwhile, the Governor Babajide Sanwo-Olu-led Lagos Government has disclosed plan to shut down the Marine Beach Bridge in Apapa.